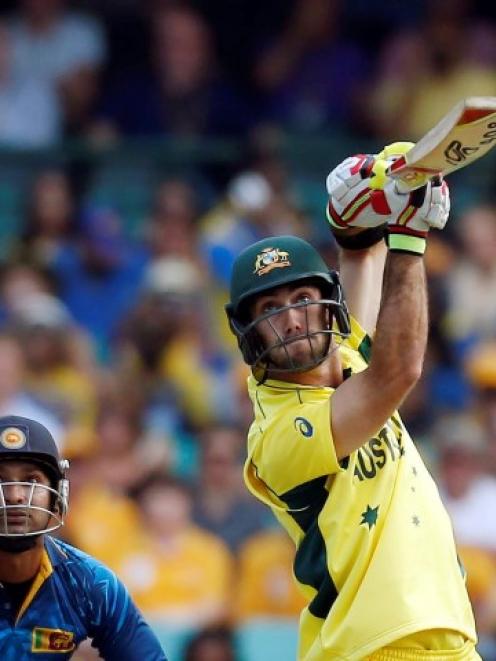 Michael Clarke and Steve Smith's partnership of 134 runs laid the platform for an imposing total of 9-376, but it was Maxwell who supplied the panache in his sparkling knock of 102.

Sri Lanka made a great fist of their chase, with Kumar Sangakkara passing 14,000 ODI runs and becoming the first man to score three consecutive centuries at a World Cup.

The visitors needed 105 runs from the final 10 overs to pull off an unlikely victory.

When Dinesh Chandimal retired hurt on 52 in the 42nd over it was the beginning of the end, with Sri Lanka finishing at 9-312 in the 47th over.

Presuming they defeat Scotland on Saturday, Australia will finish second in Pool A and avoid meeting South Africa in a quarter-final.

Maxwell's 160-run stand with Shane Watson, recalled at the expense of Mitch Marsh and demoted to No.6, was the difference.

"Hopefully it's the first of many," Maxwell said of the maiden ODI hundred he has been waiting for since debuting in 2012.

"I was happy to finally get that monkey off the back."

AB de Villiers' claim to the fastest ODI ton, scored off just 31 balls in January, was never in doubt.

Maxwell's potent mix of power-hitting and audacious strokeplay meant the same could not be said of Irishman Kevin O'Brien's record for the fastest century at a World Cup - 50 balls.

Maxwell looked to have equalled O'Brien's mark when he scampered off strike after Lasith Malinga's lbw appeal was turned down by umpire Ian Gould in the 45th over.

But the 26-year-old was too honest for that - he had a quick discussion with Gould and the official signalled leg-bye after a significant delay.

Maxwell, who reached triple figures the next delivery he faced, did however better James Faulkner's mark for the fastest ODI century by an Australian.

Clarke won the toss and was in sooner than he would have liked when Aaron Finch was stumped in the ninth over.

It brought together Australia's two best players of spin on a pitch so dry it prompted selectors to pick Xavier Doherty ahead of Josh Hazlewood.

Clarke and Smith were typically classy, steering Australia from 2-41 to 3-175.

Yet the game was in the balance when they were dismissed in consecutive overs - Clarke's stumps rattled by slinger Malinga and Smith the victim of a spectacular catch in the deep by Thisara Perera.

Sangakkara dropped a catch when Maxwell was on 93, but made amends with the bat.

He scored 104 and shared a 130-run stand with Tillakaratne Dilshan to give Sri Lanka a sniff.

Dilshan made his side's intent clear in the sixth over, hammering Mitchell Johnson for six consecutive fours.

James Faulkner dried up the runs and dismissed both Dilshan (62) and Sangakkara.

Clarke put down a catch when Dilshan was on 46, but dismissed dangerman Mahela Jayawardene for 19 with a direct hit.