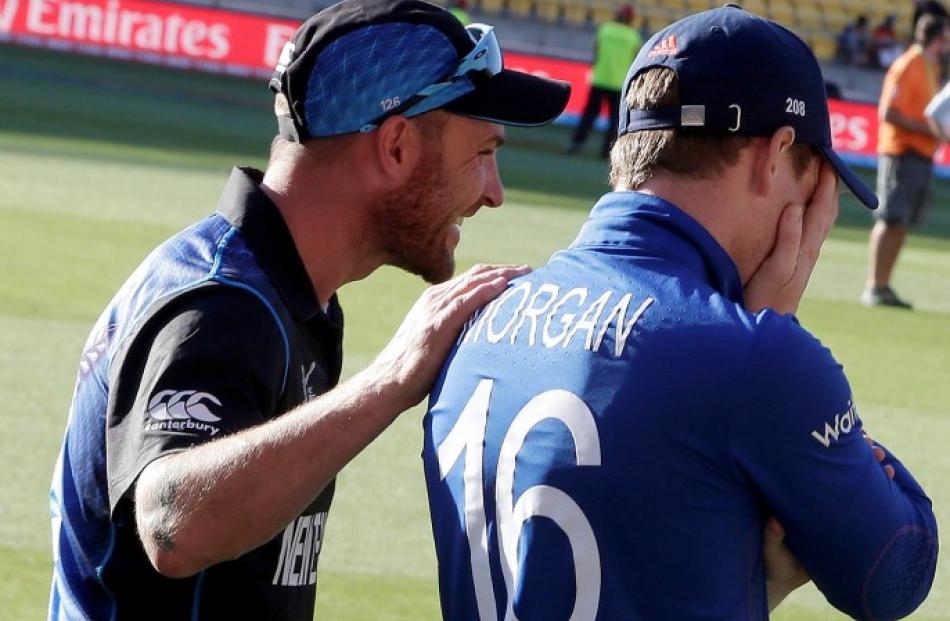 He's got the keys to Wellington and Brendon McCullum did his best to repay the honour with the bat, hitting 77 runs off 25 balls to blitz England's respected pace attack all about Wellington Regional Stadium yesterday afternoon.

The New Zealand captain created a farcical situation where he and Martin Guptill had whacked 105 in 7.1 overs before McCullum was bowled.

New Zealand reached 112 for one by the end of the ninth over when the mandatory dinner break was enforced to enable caterers and broadcasters to keep to their structured plan. No amount of crowd booing could persuade a reprieve.

New Zealand returned to make 20 runs off the next 5.1 overs and seal the eight-wicket victory.

The break at least gave the stadium a chance to take commercial advantage of 40 further minutes with a rare capacity crowd.

McCullum was at his brutal best, giving the crowd catching practice as seven balls cleared the rope.

It continued his terrific record opening against England where, in 13 innings, he has fashioned an average of 49 and a strike rate of 125. The performance also reinforced his tournament form after making 65 against Sri Lanka and 15 against Scotland with pinch-hitting at the top.

His opposite, Eoin Morgan, faced further speculation about his captaincy and form as he offered contrition at the post-match media conference for choosing to bat first.

"With the benefit of hindsight I wouldn't have batted. I didn't think it would swing for that long.

"Their bowlers managed to build pressure.

"It was probably the best bowling display we have seen since we have been on this side of the world. That says a lot, given how many games we have played in Australia. Today, we couldn't cope.

"There wasn't a cloud in the sky and it hadn't rained for a while. If it looked like it was going to swing then I'd have had no worries bowling first because that is our biggest strength. Everything about today just said 'bat'. I got it wrong.

"We said these first two games would be difficult against two of the favourites in their home conditions. But we shouldn't be beaten by this amount. We are not doing what we have practised."

Morgan said there would be no dramatic changes.

"You certainly don't want to go into a state of panic where we make three or four changes after one game. That's not what I'm about. I have always believed in making good decisions and backing the right player at the right time.

"The 11 that played today were the best to win the game. Just because we were out-performed today doesn't mean I'm binning anyone."