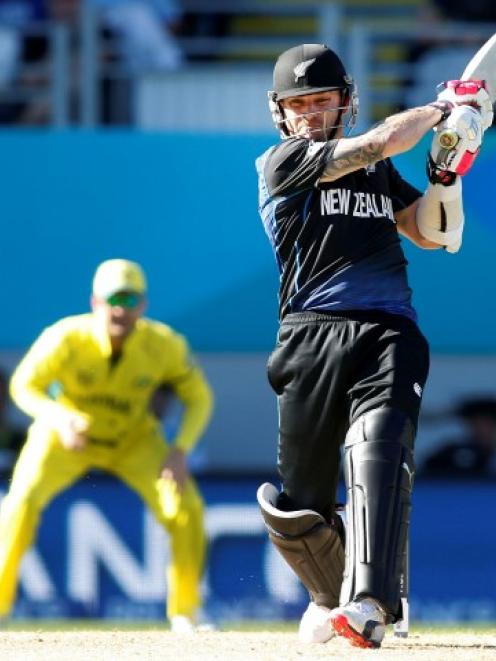 Brendon McCullum's strike rate of 193 is the best of anyone who has faced more than 37 balls in the World Cup. Photo Reuters
Brendon McCullum asked a curious question of Mitchell McClenaghan after one delivery in the nets on Wednesday morning at Seddon Park.

"Did you see me coming?"

It holds a key to McCullum's success against opposition bowlers ahead of New Zealand's final World Cup pool match against Bangladesh.

His foot movement is the batting equivalent of the Ali shuffle. As a bowler climbs into his action, and before he can adjust his delivery, the New Zealand captain is either advancing to the pitch of the ball or creating room outside off stump to plunder anywhere from cover point to long off.

The feet provide one component to the successful execution; another comes with the hand speed through the ball, which has generated enough power this tournament to see the ball reach the boundary 34 times and clear it 12 times on his way to three half-centuries and an average of 49.80. McCullum's strike rate of 193 is the best of anyone who has faced more than 37 balls.

The captain has the insurance policy of Kane Williamson and Ross Taylor at No3 and No4 but deserves credit for creating a distraction. Every New Zealand opponent mentions McCullum's capacity for batting destruction in the build-up.

It has become a smoke screen which reduces the pressure on New Zealand's other batsmen.

Kalpage offered some bait, saying he expected McCullum to be out early. "He hasn't proven himself starting against spinners. It'll be tough, but we have plans for him."

Yesterday, Hathurusingha said: "It's difficult because he's doing the same thing as us, playing without fear, but again, we'll play to our [spin] strengths."

McCullum wasn't biting. "It's talk, isn't it. You can't get too wound up.

"They operate with slower bowlers and that's one of the quirks facing a team like Bangladesh. I'll respectfully wait and see what [the game] brings."