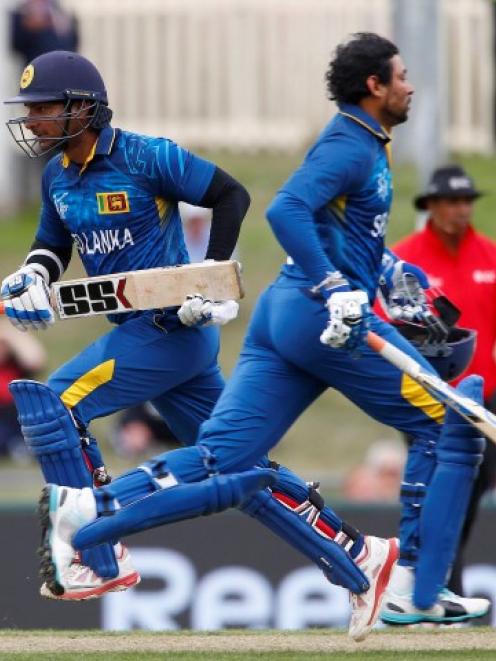 His team had already booked a place in the quarter-finals but Sangakkara's insatiable appetite for runs continued unabated as he added 195 runs with Tillakaratne Dilshan (104) against Scotland's limited bowling resources on a perfect batting track.

Down the order, captain Angelo Mathews (51) clobbered six sixes in a 21-ball blitz in the frantic final phase of the innings when ropes were cleared and wickets tumbled regularly.

Freddie Coleman (70) and skipper Preston Mommsen (60) tried their best but Scotland simply lacked the batting firepower to chase down such a huge victory target and folded for 215 in the 44th over.

For Sri Lanka, who rose to second in Pool A with the win, Dushmantha Chameera and Nuwan Kulasekara justified their selection claiming three wickets apiece.

Earlier, Mathews won the toss and decided to bat first but Scotland did well to restrict Sri Lanka to 46-1 after 10 overs.

Dilshan and Sangakkara counter-attacked near the halfway mark when Dilshan hit Davey for back-to-back fours and followed it with a six.

Sangakkara also accelerated and soon the former captains got into a competition -- who reaches the century first.

Dilshan completed his 22nd ODI hundred in the 34th over with a single that brought Sangakkara on strike and the 37-year-old southpaw achieved his own on the very next ball.

Sangakkara went on to consolidate his position at the top of the tournament's run-getters' list with a scintillating knock that contained 13 boundaries and four sixes.

Dilshan hit 10 fours and a six in his fluent innings before falling to Josh Davey (3-63) in the 35th over.

After Dilshan's exit, Sangakkara hit Alasdair Evans for four boundaries and a six in a 24-run over.

Davey dealt a double blow in the next over, dismissing Mahela Jayawardene and Sangakkara off successive deliveries to become the tournament's highest wicket-taker.

Boundaries kept flowing though as Mathews hammered Matt Machan for four successive sixes to race to a 20-ball fifty before perishing in his quest for the fifth of that 25-run over.

Sangakkara also went past Australian Adam Gilchrist's (52) World Cup record of most dismissals by a wicketkeeper.