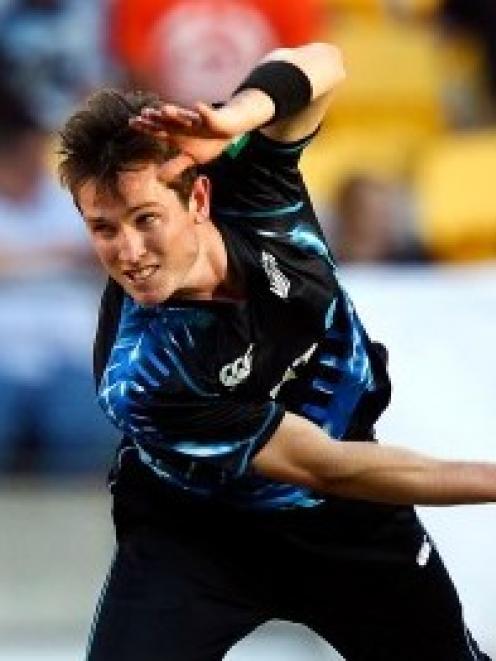 Adam Milne
New Zealand pace bowler Adam Milne was expected to take a full part in training this afternoon as he completes his recovery from a shoulder injury.

The 22-year-old missed last Friday's Pool A victory over Bangladesh in Hamilton after he took a knock to his shoulder while taking a catch in the outfield during New Zealand's previous game against Afghanistan in Napier on March 8.

It wasn't thought to be serious and Black Caps coach Mike Hesson said the tearaway seamer, the fastest bowler in the New Zealand squad, had scrubbed up well this week.

"We showed a bit of precaution there but he's fully fit to take a part in training today and we'll see how that goes," Hesson said.

New Zealand assembled in the capital yesterday and didn't train as they slowly began their preparation for their quarter-final date with the West Indies at Wellington Regional Stadium on Saturday. If Milne can prove his fitness this week he seems likely to return for the game.

The Black Caps were meant to practice this morning but they bumped that back to this afternoon to avoid the poor weather in Wellington and Hesson said Tuesdays were an important day for the pace bowlers to shake out the travel from the weekend.

"We wanted to make sure we could get outside. We could have gone indoors but we wanted to get our bowlers to go outside for a bit of a roll."

Hesson said they had completed the scouting report on the West Indies' batting line-up and their bowlers would be put under the microscope during the next 24 hours.

"We've got lots of information. It's just a matter of making sure we don't throw it down people's throats."

West Indies opener Chris Gayle is the most vital cog in their batting order and he missed last Sunday's final pool outing against the UAE in Napier with a back injury but he was expected to be fit for this weekend's knockout clash with New Zealand.

"We won't be spending our time on just one player," Hesson said. "We'll be making sure we prepare as well as we can for everyone."

The Cricket World Cup quarter-finals get under way tomorrow with South Africa meeting Sri Lanka across the Tasman. The winner of that clash will play either New Zealand or the West Indies in Auckland next Tuesday.

"That's a massive game," Hesson said. "Obviously we are on the same side of the draw, so it'll be interesting at Sydney. I think winning the toss and batting over there's generally pretty important if it's going to turn. So it's a good match."

Hesson wouldn't be drawn on a prediction but said the conditions may suit Sri Lanka if they were able to bat first.