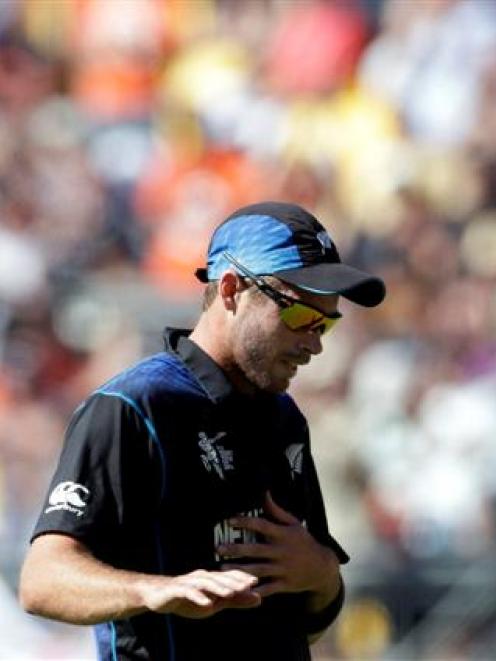 Tim Southee: 'We've all been in pressure situations at the death as bowlers. It's nothing new to us.'
It's like waiting at a railway station; you know the train's on its way, but you can't see it coming around the bend.

New Zealand's strong bowling performances at the World Cup have been highly impressive but the upside of that has left them slightly skinny in one key situation.

Nevertheless, Tim Southee, the leader of the bowling attack, struck a confident tone when the topic of the death overs was raised yesterday -- that is, how New Zealand will perform when a batting opponent is pushing hard in the final 10 overs.

It may not come against Afghanistan on Sunday, and possibly not against Bangladesh in Hamilton next Friday. But sure as you can be, it will happen in the knockout stages.

In the cup opener, Sri Lanka were dismissed for 233 in 46.1 overs but were so far off the pace there was no real pressure on the preferred operators at that stage, Southee, Adam Milne and Corey Anderson. Scotland batted first and were dismissed for 142 in the 37th; England were blown away for 123 in the 33rd; while Australia were all out for 151 in the 33rd. So no pressure, then.

"We've all been in pressure situations at the death as bowlers. It's nothing new to us," Southee, the cup's leading wicket taker with 13, said yesterday. "Obviously they're grounds we're familiar with, and [we know] where sides look to attack on smaller grounds.

"Although we haven't come up against that in the World Cup yet, we've played a lot of cricket and been in those situations lately and I'm sure the boys will step up when the occasion arises."

So what to do when the squeeze comes on against, say, AB de Villiers or MS Dhoni, masters at putting bowlers through the mincer late on?

Waqar Younis was among the kings of late-innings bowling in the heyday of a career which produced 416 ODI wickets in 262 games at 23.8.

Searing pace, reverse swing and fierce inswinging yorkers tended to be beyond the comprehension of most batsmen. It would be hard to top the six for 30 with which he monstered New Zealand at Eden Park in 1994, the last six wickets falling for 19 to defend 161 and set up a tie.

Now Pakistan coach, Waqar remains adamant on the best delivery to bowl at the crunch time.

"The yorker is the best ball," he said.

"There are different theories coming from different coaches about bowling short balls and using those square fielders, but I still feel the good yorker is the best delivery."

Southee takes the point but argues that with only four fielders allowed outside the circle under the current rules, it is harder to defend.

Southee and swing partner Trent Boult's proficiency with the white balls has been an eye-catching feature of the cup.

The balls have retained their swing properties longer than had been expected. Southee had no idea why that was, other than perhaps overhead conditions impacting, or the two balls used per innings staying in better condition.

"In the last few games we've been able to swing it at 15 overs old. But there's going to be times when it's not swinging, so you have to find other ways to take wickets.

"I think we're a skilful enough attack to come up with different ways to take wickets through an innings.

"Our mentality doesn't change; we're still trying to take wickets whether it's swinging or not."

- David Leggat of the New Zealand Herald in Napier