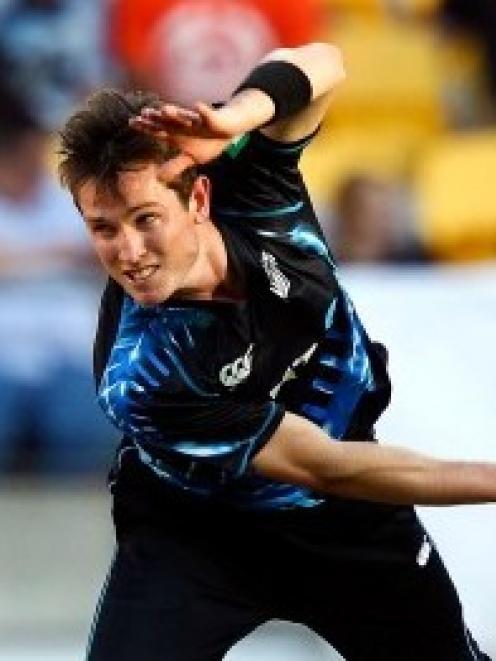 There are any number of clutch points that excite argument ahead of the transtasman World Cup blockbuster at Eden Park on Saturday.

Here's one. Broadly it goes along the lines of how New Zealand's batsmen are going to cope with a speed attack, headed by a couple of left arm Mitchells, Johnson and Starc, who regularly give the 150kmh mark a shoulder charge.

Hesson pondered a moment, then replied: "We face Adam Milne every day."

The Central Districts' speedster has locked in a spot in the favoured XI for the first three games and the prospects of change for Saturday are slim. That said, Hesson may have let slip a different line of thought when he said there were unlikely to be "many" alterations. Perhaps he actually meant "any". We'll see.

Milne is slippery but there's a few around the game now who can give a batsman a genuine hurry up. The novelty hasn't exactly worn off, and it remains a sight to thrill.

Hesson said Milne's presence in New Zealand's ODI squad since the tour to the United Arab Emirates in November had provided opportunities for the batsmen to get plenty of work at pace.

"He bowls at 150, and we cope with that okay," Hesson said. "Every side we play has got some different challenges. Australia have got guys who bowl with good gas. So do we."

Hesson was offered the equivalent of a free hit at Australian opener David Warner, after his "brain explosion" jab at New Zealand skipper Brendon McCullum's bristling modus operandi at the top of the order. Warner suggested if Australia "bowl well to him, we'll create pressure and he'll have a brain explosion".

Hesson politely declined to step into the ring.

"If you're able to put anyone under pressure through your skills then hopefully you're trying to get them to make poor decisions. He's obviously a decent player," Hesson said of Warner. "They've got plenty of others who are decent players as well so we just prepare ourselves as best we can."

There was the usual banter about avoiding the favourites tag. Neither Hesson nor Australian allrounder Shane Watson exactly reached out and grabbed it.

Occasionally you wish someone would roar: "We're favourites!" That was never going to happen yesterday. Indeed Hesson gave the notion a decent rebuff.

"For us it doesn't mean anything. You've got two good sides playing pretty well at the moment. I don't think it [being favourites or not ] adds a lot to it," he said.

New Zealand's recent ODI record at Eden Park isn't flash. Since Australia were last in New Zealand in early 2010, New Zealand have lost five and won one of the eight ODIs on the country's oddest-shaped cricket ground. They have different game plans for Eden Park, with good reason.

"Sometimes we've done it better than others. And the pitch plays differently throughout the day and we have a little bit of experience with that," Hesson said.

The next two days will be spent with the two teams performing a verbal pas de deux ahead of Saturday. By which time all the shadow boxing will be well and truly exhausted.