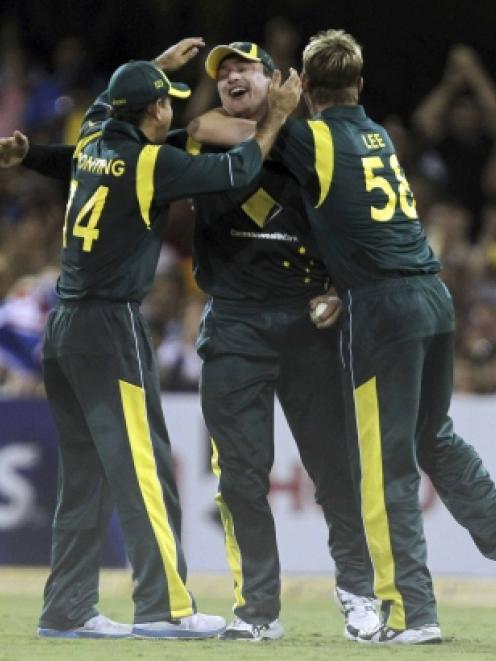 Hilfenhaus and evergreen quick Brett Lee combined to reduce India to 36 for four wickets within 11 overs. India finally stumbled to 178 all out in the 44th over in reply to Australia's 288 for five.

Australia took over from India at the top of the standings after the seventh match of the tournament which also features World Cup finalists Sri Lanka.

Dominant with both bat and ball, the only fly in Australia's ointment was another failure by stand-in captain Ricky Ponting, who scratched around for seven runs from 26 balls before flicking a Zaheer Khan ball off his pads straight to Irfan Pathan at square leg.

The 37-year-old has endured a nightmare series, scoring two, six, one and two in his previous four innings and will be under huge pressure to retain his place in the side with regular skipper Michael Clarke expected to return from a hamstring strain.

Australia won the toss and elected to bat in baking hot temperatures and rode their luck on a rock-hard pitch as India dropped catches and bowled waywardly in a largely woeful effort in the field.

Rohit Sharma dropped opener Matthew Wade from the second ball of the innings, leaping across from second slip to grass a one-handed attempt that should have been left for Sachin Tendulkar at first slip.

Wade and David Warner survived to compile a first-wicket stand of 70 before the latter was out for 43, poking at an innocuous delivery from Irfan Pathan that sent the ball straight to Tendulkar at mid-wicket.

Wicketkeeper-batsman Wade was also out with a loose shot for 43, scooping a ball from Rohit Sharma straight back to the part-time spinner, before Mike Hussey and Peter Forrest took control with a 100-run stand.

Hussey scored his 5000th ODI run before being deceived by a slower ball off Pathan to be caught at midwicket by Suresh Raina on 59.

Forrest was out shortly after for 52, well caught by Virat Kohli at deep mid-wicket but there was to be little relief for India as David Hussey and Dan Christian plundered 65 runs from the last six overs.

India's chase began disastrously, with Gambhir caught behind for five off 35-year-old paceman Lee and number three batsman Kohli very nearly followed three overs later when he slapped a shot to Xavier Doherty at third-man, only for the spinner to spill the chance.

Farcically, Tendulkar, on three, slashed at a wider delivery on the next ball off Hilfenhaus which went to exactly the same fielder who made no mistake the second time round.

Lee had Sharma caught behind for a duck and Hilfenhaus coaxed a nick from Kohli for 12. India skipper Mahendra Singh Dhoni attempted to mount another fightback after helping India cobble a tie against Sri Lanka in their previous match in Adelaide on Tuesday.

The wicketkeeper-captain scored a defiant 56 and shared a 46-run stand with Raina before a 32-run partnership with all-rounder Ravindra Jadeja.

His dismissal, skying a catch to midwicket off Hilfenhaus, reduced India to 149-7 and was the final nail in the coffin as man-of-the-match Hilfenhaus and Lee conceded only 29 more runs in cleaning up the tail.