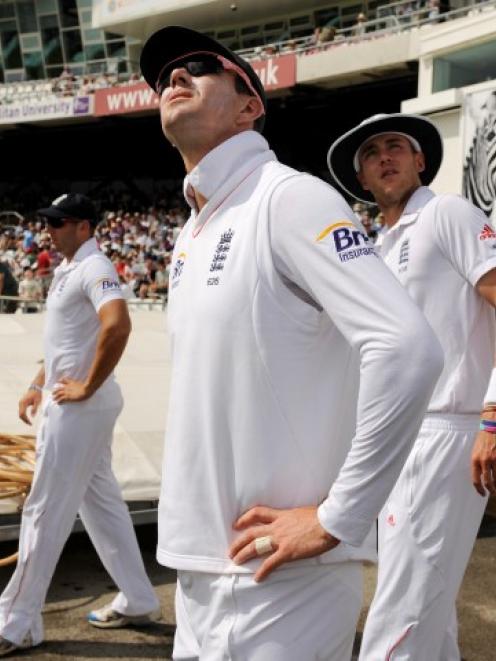 England's Kevin Pietersen (3rd L) and Stuart Broad (4th L) look up as the players prepare to walk on to the field after a rain delay during the second cricket test against South Africa at Headingley in Leeds. REUTERS/Philip Brown
England failed to make a breakthrough before rain forced the abandonment of play on the fourth day of the second test at Headingley as South Africa reached 39 without loss in their second innings.

Jacques Rudolph, opening in place of the injured Alviro Petersen, was unbeaten on 21 while skipper Graeme Smith was on 17 as he continued to bat with a minor knee injury.

Thunder and lightning arrived just minutes after the players left the field with the skies over northern England turning an ominous dark grey. A minimum 45 overs were lost in the day.

""It was frustrating," England's Matt Prior, who hit 68, told reporters. ""To get a small lead and to put South Africa under some pressure it would have been nice to have had the opportunity to pick up some wickets.

""There are now only two results that can happen: a draw or an England win. It can be hard sometimes to know you have got to bat out a day, which is what South Africa have to do."

It was a frustrating passage of play for England, who had failed to capitalise on Kevin Pietersen's exhilarating first innings century that helped the hosts to 425 in reply to the Proteas' 419.

Smith survived a scare before lunch when England reviewed an lbw appeal but it was rejected. Television replays showed the ball would have bounced over the stumps.

Apart from a couple of edges that failed to carry through to the slips the South African openers held their own.

""It's a pity about the weather," South Africa bowler Morne Morkel said. ""The key thing for us is to bat well in the first session (on Monday) and look at it from there. Hopefully the weather will be good."

Earlier on Sunday, Pietersen had resumed on 149 with the team on 351 for five.

England had hopes of passing South Africa's first innings and taking a significant lead, but Pietersen was out to the second ball of the morning - lbw to Morkel without adding to his overnight score.

Pietersen's effort threatened to turn the test on its head on Saturday with a counter-attacking innings that carried England away from potential danger at 173 for four.

Tim Bresnan (9) and Stuart Broad (1) failed to really trouble the scorers and could not stay with Prior (68) and help him to fashion out any kind of significant lead.

Prior advanced his score from 20 overnight before he became the ninth wicket to fall when he swept leg-spinner Imran Tahir to Dale Steyn at fine leg.

James Anderson (8) was the last man out, bowled by Tahir after reverse sweeping the spinner for four the ball before.

Meantime, the South Africa team doctor said Smith's knee would be assessed after the match but he did not believe his injury was serious.

Of more concern, is the back spasms suffered by Jacques Kallis, but he hopes Kallis will be recovered within four days.

England, 1-0 down after losing at the Oval in the first test, need to avoid defeat in the three-match series to prevent South Africa from leapfrogging them and claiming the number one test ranking.