Cricket: Satisfactory day at the office 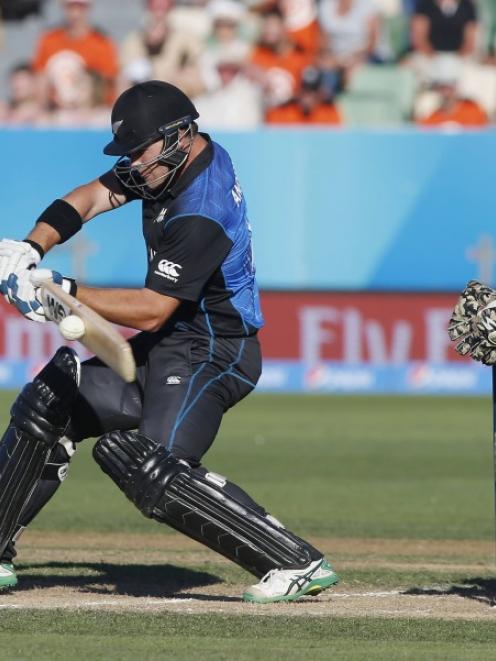 New Zealand's Cory Anderson plays a shot watched by Afghanistan's Afsar Zaza (R) during their Cricket World Cup match in Napier. Photo by Reuters.
New Zealand accomplished some of the goals it had set for its match against Afghanistan, although perhaps not in the order it would have wanted.

Then again, according to senior player Daniel Vettori, forget talk of specific objectives to be taken from games; all New Zealand is focused on is winning: ''You guys are the ones who want boxes ticked,'' he said last night.

With three of its top five batsmen in need of time at the crease, New Zealand made clear it wanted to bat first, not to mention that the McLean Park highway is by some distance the country's best for batting. The rule of thumb is get in, get runs, then defend them.

Instead, Afghanistan chose to bat first, and did well to get to 186 after a wobbly start. New Zealand completed the win by six wickets with 13.5 overs to spare.

Afghanistan's decision at the toss made good cricket sense. However, part of the thinking might also have had its roots in a desire to avoid risking its bowlers getting another pummelling from a test nation batting group, after Australia had flogged it for 417 in Perth during the week.

And so before the New Zealand batsmen could get their pads on, the bowlers had their longest workout of the World Cup. It took 47.4 overs to dismiss Afghanistan and that meant a solid block of overs for the frontline attack.

Vettori took his 300th ODI wicket - the first New Zealand bowler to the milestone - in the course of four for 18 off 10 overs. The batsmen initially could not work him out, then settled for care over carefree.

Trent Boult picked up three, and Adam Milne, in real need of time at the bowling crease, got through 10 overs.

Afghanistan's only stand of note was 86 for the seventh wicket between half century makers Samiullah Shenwari - who survived a blow on the back of his helmet from Corey Anderson, which left a distinct dent - and Najibullah Zadran. They batted, respectively, with caution and composure, and exuberance and free hitting.

Twice, spirited lefthander Najibullah put Tim Southee into the crowd en route to a run a ball 56, and received a standing ovation upon his dismissal - rare but deserved.

After Brendon McCullum's standard hectic start - 42 off 19 balls - the rest of the innings proceeded at a far more measured pace than of late.

Martin Guptill's 57 included some handsome shots down the ground and through the offside before he was run out in a mix up with Ross Taylor. He has insisted he has never been out of form, but yesterday can't have hurt.

Taylor was scratchy, badly beaten first ball, but was there at the end on 24 after 77 minutes. Elliott got to 19 comfortably enough before running himself out, beaten by a direct throw from a push and run to mid off. Unnecessary, as was Guptill's dismissal.

When opportunities have been limited, every bit helps.

New Zealand rounds off group A play against Bangladesh in Hamilton on Friday.