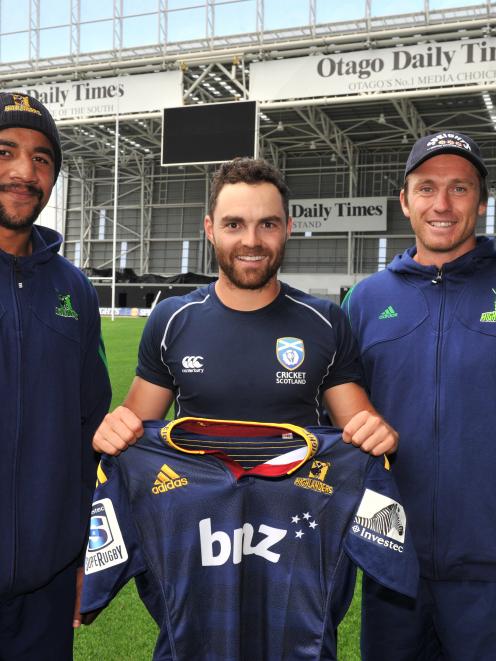 Highlanders co-captains Nasi Manu (left) and Ben Smith gave Scotland cricket captain Preston Mommsen (centre) a Highlanders jersey at Forsyth Barr Stadium yesterday. The captain gave a quaich - a small Scottish drinking bowl - to the Highlanders. The Scottish side had a tour of the stadium, including a bit of a runaround on the pitch. Photo by Linda Robertson.
Scotland captain Preston Mommsen is hoping the conditions will favour his side for today's Pool A World Cup match against Afghanistan at the University Oval.

The Scottish have received a warm welcome in Dunedin but he is hoping for a cooler day and a green wicket.

''As it stands now, it is nice and chilly and something a bit foreign to the Afghanistan team, whereas this is something we are sort of used to,'' he said.

''It is a fresh wicket so if the ball moves around a little bit, I think that will play in our favour.''

The teams have met on eight occasions and Afghanistan leads the head-to-head battle 5-3.

But Scotland recorded a 150-run victory the last time the teams met.

''We take a huge amount of confidence from that game in Abu Dhabi. It is a huge psychological advantage, I think,'' Mommsen said.

''We had a clear strategy and tactic against them and I'm pretty sure we will resort to the same formula [today].''

Negating their threat has been a major focus.

''We have played a lot of cricket against them in recent times and we know that they do have good ammunition in their pace attack.

''We will have to play pretty tight cricket up front and negotiate that new ball and, hopefully, get them back in the second and third spells.''

Afghan opener Javed Ahmadi said his side had garnered a lot of confidence from its performance against Sri Lanka.

Beating a full-member nation is high on Afghanistan's agenda but the game against Scotland presents a more realistic opportunity for the World Cup debutants to record a breakthrough win.