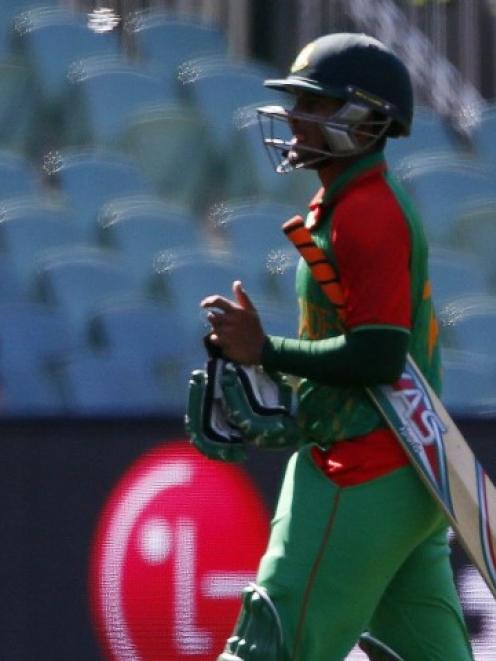 Much has been made of Bangladesh's seven consecutive home ODI wins against New Zealand but what's equally noteworthy is the lack of a victory in six matches away.

Before the World Cup, Shakib was the world's leading all-rounder in each format. Sri Lanka's Tillakaratne Dilshan has reclaimed pole position in ODIs but Shakib's pedigree is indisputable.

The left-handed batsman uses his feet and the depth of the crease well while his left-arm orthodox deliveries are flighted with accuracy and guile. He is used to performing on the big stage, notably against capacity 90,000 crowds at Eden Gardens for the Kolkata Knight Riders or in this season's Big Bash for the Melbourne Renegades.

It's claimed he is the most famous man in Bangladesh. His wedding was broadcast live on national television and he can't walk the streets of Dhaka without the risk of being mobbed.

However, Shakib was issued a six-month ban from the national side for misbehaviour in July and faced the threat of permanent exile.

He fell out with coach Chandika Hathurusingha after being accused of travelling to the Caribbean Premier League without clearance from his board. There was also an altercation with a spectator during an ODI against India in Mirpur.

It prompted the national board president, Nazmul Hassan, to suggest he had "a severe attitude problem, which is unprecedented in the history of Bangladesh cricket".

In September Shakib was deemed to be rehabilitated enough to take part in Zimbabwe's tour where, at Khulna in November, he became the third player after Imran Khan and Ian Botham to score a century and take 10 wickets in a test.

"I played with him at Kolkata [in the Indian Premier League]. He's got a great outlook on cricket, and life in general. He's successful as a pioneer of Bangladesh cricket to get them to the level they have.

"He's a smart cricketer with all-round skills who has plenty of fight in him. Most times we play Bangladesh he's performed well. He'll be a threat and we've got to try to keep him quiet."

As a former captain, Shakib could take on more responsibility if skipper Mashrafe Mortaza is ruled out. Yesterday speculation swirled that a sore throat or calf injury might rule him out.

Another theory suggested he wouldn't be risked after a slow over rate in the 15-run win against England. Mashrafe pleaded guilty and was fined 40 per cent of his match fee.

Under International Cricket Council rules a captain can be suspended for two minor over-rate offences or one serious offence during an event. The upshot is that they will want to guarantee his presence for their quarter-final.