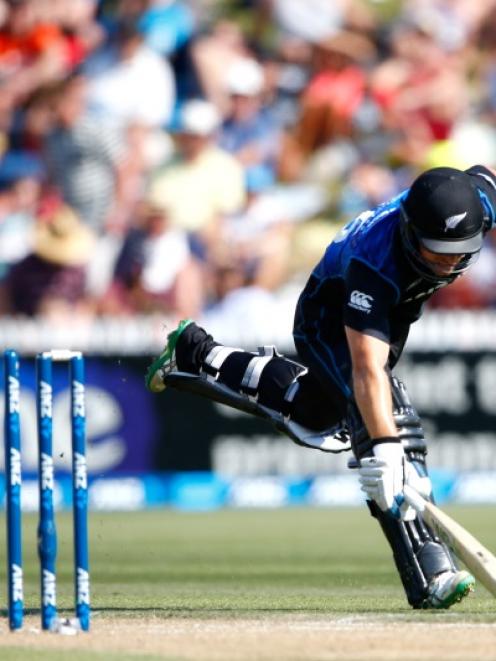 New Zealand's Nathan McCullum is run out against Sri Lanka. Photo by Getty
No prizes for guessing the major topic for discussion when New Zealand have their team meeting in Auckland today.

A slipshod batting display left Sri Lanka with a straightforward piece of business to win the second one day international (ODI) at Seddon Park last night and draw level in the seven-game series.

Their captain, Brendon McCullum had given them the ideal launching pad with his fifth ODI hundred, done in his usual flourishing style.

New Zealand lost their way with some dreadful running between the wickets which cost them four wickets and able to muster just 248, well below par on this pitch.

Sri Lanka's openers Tillekaratne Dilshan and Dimuth Karunaratne got going smartly - indeed there was no dilly-dallying through the chase, all assertive, run-a-ball batting - and Dilshan went onto anchor the winning chase with his 19th ODI century.

He had one life, at six, when seamer Matt Henry found an inside edge but wicketkeeper Luke Ronchi could not hold the difficult one-handed chance.

From there, Dilshan drove magnificently, and cut and pulled hard in his 127-ball 116. When Adam Milne whizzed one early 150km/h delivery at him, Dilshan stepped forward and drove it straight back past the bowler in an emphatic statement.

He dispatched three fours off Milne to the cover fence in the space of six deliveries. It was a tough learning night for the young quick.

Kumar Sangakkara planted three balls into the crowd, but he would have afforded himself a quiet smile with one - lofting Trent Boult, his test nemesis, back down the ground.

Mahela Jayawardene played a handful of delightful cuts but at 163 for three, New Zealand might have fancied a slight opening of the door.

However captain Angelo Mathews kept Dilshan company immediately rammed it shut and the win was achieved with 14 balls to spare.

New Zealand produced a bizarre performance with the bat.

The pitch is not among the quickest in the country but should have been worth somewhere around 280 and had McCullum carried on a while, they'd surely have gone beyond that.

He departed to the first ball of the 31st over, at which point New Zealand were at 158 with three down.

Run outs can be contagious. Have one and the following batsmen can get twitchy. What should be regulation, if brisk, short singles become yes, er, wait situations.

In their desire to avoid a repetition, they make poor calls, out of a clouded mindset.

Three batsmen went in that fashion in the space of 10 deliveries during the 37th and 38th overs, two of them at least partly attributable to fine pieces of fielding by Jeevan Mendis and Dilshan.

The fourth run out shortly after, Nathan McCullum, was a badly-judged run combined with a direct hit from the deceptively fleet-footed 37-year-old Jayawardene.

Put together it was a complete shower of a display of inept running.

Ross Taylor wasn't in prime form either, spending 69 balls over his 34.

A penny for the skippers' thoughts as his team conspired to butcher a terrific platform he'd given them.

His speed of foot movement gets him into advantageous positions and throws bowlers off their stride, and if the occasional mishit should keep the fielders interested, he's got a good piece of willow and his confidence is high.

Spinners Rangana Herath, Mendis and Dilshan did well to put a cramp on New Zealand. But the tourists' doubtless figure the chasing challenge was less than it should have been.

The third ODI is at Eden Park on Saturday.

- By David Leggat of the New Zealand Herald in Hamilton