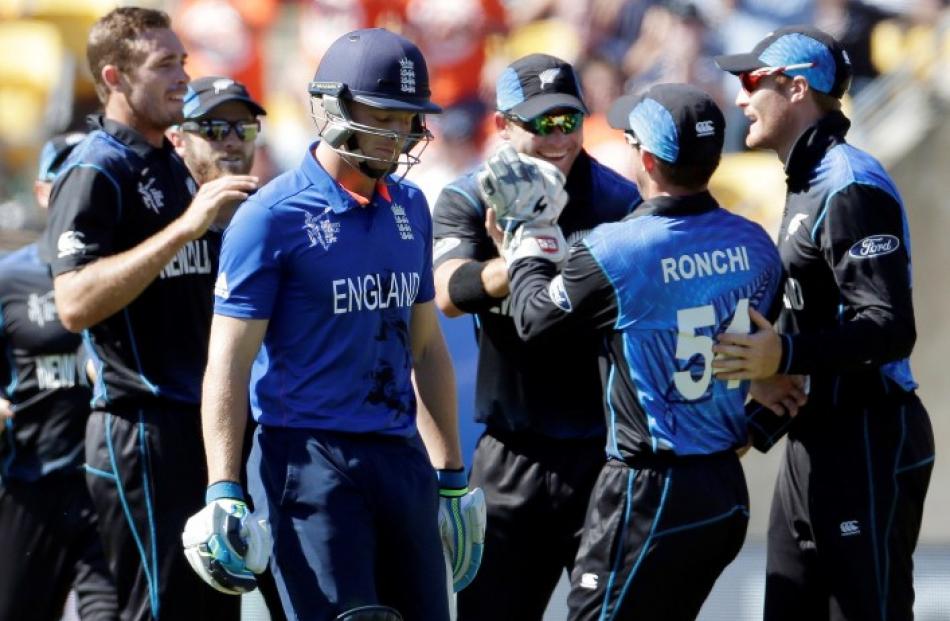 A freakish wrist position, the raucous barracking of an almost capacity Wellington crowd and reciprocal faith between captain and bowler combined to earn Tim Southee the record of New Zealand's best figures in a one-day international against England yesterday.

His seven for 33 from nine overs enabled the 30,148 attendees (and a few peeking over the roof rim from the adjacent cruise liner) to witness a world-class performance which has intensified New Zealand's World Cup favouritism.

The schoolboy prodigy who came off a Northland farm to board at King's College, but who hasn't forgotten his Maungakaramea Cricket Club roots, now leads the attack.

The grin on his face was as indelible as his place in the annals of New Zealand cricket history as he fashions a career on a trajectory towards that rare honour of being considered as a great of the game.

Southee was asked if it was his best day in a black or white shirt.

"It's up there," he said. "It was one of those days you almost can't do anything wrong.

"It's almost the perfect performance. We know England are a quality side and they have some world-class players, so for us to go out and play the way we did, it's a good sign."

Southee said captain Brendon McCullum, who blasted one of the fastest international ODI 50s (off 18 balls), galvanised the team after they lost the toss and fielded on what looked an excellent batting wicket.

"As bowlers he gives you the confidence to go out there knowing he's right behind you setting these aggressive fields.

"There wasn't a hell of a lot in the pitch. It looked a good batting wicket but we managed to get it swinging. It hasn't swung like that in a one-day game for a while. I think it proved the difference.

"Trent and I thrive when it swings, you see how dangerous it can be. It's a gift we have with good wrists."

England captain Eoin Morgan was in awe of the New Zealand skill, in particular Southee, who he said was tracking towards being comparable to England spearhead Jimmy Anderson.

"They bowled incredibly well, the ball swung late and they exposed us. You have to play the ball in front of you but we don't expect it to swing for 30 overs," Morgan said.

"When you can turn over guys like Ian Bell in the fashion [Southee] did [by clipping the top of off stump]. All credit to him."

Southee said he was spurred by the home crowd which included a standing ovation and chant of "Sou-thee" when he had a spell at third man.

"It's something we'll look back on in time and think how amazing this occasion was with a full house at the Cake Tin. Having that many people behind us is testament to the brand of cricket we've been playing which is getting people through the gates. It's something to embrace. That atmosphere is among the best we've played in front of."

There was a symmetry to Southee taking the best ODI figures from outgoing bowling coach Shane Bond, who took six for 19 against India in Bulawayo in 2005.

"He takes a lot of pride in seeing the bowlers do well and he's been instrumental in the way we've performed for a couple of years. It will be sad when he goes. We're better bowlers for his input."

The team now takes a break for three days before reconvening ahead of the Australia game next Saturday.