Cricket: Warner to embrace the hate in Auckland 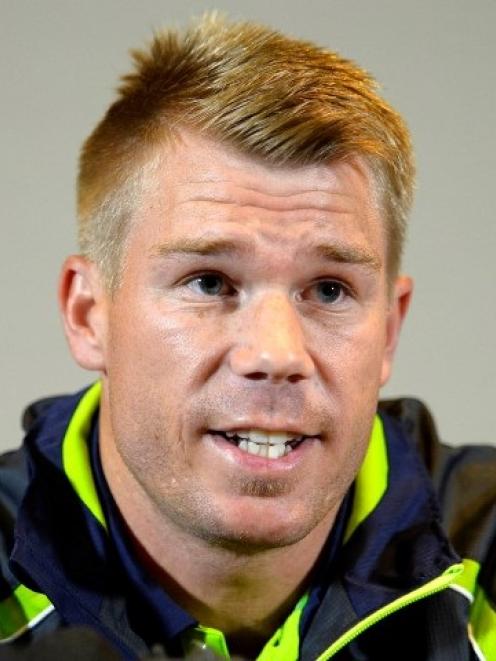 Australia lose home-ground advantage for the first time during the World Cup when they face co-hosts New Zealand in Saturday's blockbuster clash at Eden Park.

Warner, whose love of a scrap and forthright opinions in the press make him a popular target of cricket fans around the world, knows what to expect.

"I hope they come out and boo us and give us crap, like they always do. That's what's going to happen," Warner said.

"We love it, it gets us up and going. Gets the adrenaline going for sure."

Virat Kohli and Kevin Pietersen are among the many to have toured Australia and been shocked by the colourful language and vitriol coming their way from the outer.

New Zealand supporters have also proven more than capable of dishing out some gutter language in the gentlemen's game.

"You get some obscure swearwords and a couple of things thrown at you, but that's what you expect when you come here," Warner said.

"It's probably going to happen again."

Warner vowed to embrace the animosity.

"They can give it to me as much as they want. I'll just get it on board and let my bat do the talking," he said.

It will be no easy feat against a talented attack spearheaded by Tim Southee, who swung the ball well to snare figures of 7-33 and embarrass England last Friday.

Warner acknowledged he and Aaron Finch would need to be very watchful early, even at a ground where the boundaries are tantalisingly close.

"One hundred per cent, in their conditions," Warner said, when asked if the Blackcaps' bowling attack was as good as any in the world.

"If you get too greedy and you see small boundaries straight away, you can easily lose rhythm and momentum.

"You've still got to respect the opposition."

Victory will almost certainly guarantee Australia won't return to Auckland during the tournament, with the higher-ranked team in the pool stage to host a potential trans-Tasman semi-final.

Warner's experience in New Zealand is limited to a pair of Twenty20s in 2010, including a Christchurch fixture where Brendon McCullum scored a ton and the visitors lost in a super over.

Warner acknowledged the scalp of McCullum, a driving factor in New Zealand's recent resurgence, would be one of the keys to victory.

In both regards, he was confident.

"If we bowl well to him, we'll create the pressure and he'll have a brain explosion," Warner said.

"If we play our best brand of cricket we're going to get over them."

Michael Clarke was passed fit for last week's washed-out clash with Bangladesh in Brisbane and is set to replace George Bailey in the Australian XI.

Allrounder James Faulkner is progressing well in his recovery from a side strain and has started bowling in the nets off a shortened run-up.

However, Faulkner is not expected to be available for Saturday's crunch clash.