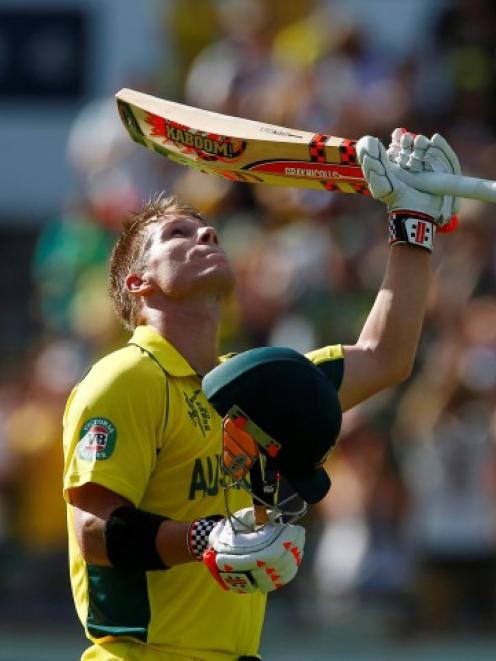 David Warner celebrates reaching his century against Afghanistan in Perth. REUTERS/David Gray
Shane Watson felt the full force of the axe as sparkling knocks from David Warner and Glenn Maxwell lifted Australia to a record 275-run World Cup win over Afghanistan at the WACA Ground.

In reply, Afghanistan were dismissed for 142 in 37.3 overs despite the best efforts of Nawroz Mangal (33).

Paceman Mitchell Johnson (4-22) was the chief destroyer, while Josh Hazlewood and Mitchell Starc chipped in with two wickets each.

The result was the largest World Cup victory, bettering the 257-run wins posted by India in 2007 and South Africa last week, and was the second-biggest ODI win in history.

The win lifted Australia up to third in Pool A ahead of Sunday's crunch clash with Sri Lanka at the SCG.

Watson might have to rely on injuries in order to break back into the side after being dropped for James Faulkner against Afghanistan.

Although Faulkner and fellow allrounder Mitch Marsh failed to fire against the cricketing minnow, they appear to have jumped ahead of Watson in the pecking order.

Marsh, who was expensive with 0-25 off three overs, appeared proppy at times while bowling, but he was able to complete the match.

Australia's total was a World Cup record, and the seventh highest in ODI history.

The only other time Australia had posted a score in excess of 400 was in 2006, when their 4-434 wasn't enough to beat South Africa.

Cheers rang out around the WACA when Afghanistan won the toss and resisted the temptation to bat first.

But the cheers turned to shocked silence in the third over when Aaron Finch edged Dawlat Zadran to first slip.

With the scoreline reading 1-14, Australia's hopes of building a 400-plus total looked shaky.

But Warner and Smith made light of the situation, combining for Australia's highest ever ODI partnership (260) to take control of the game.

Afghanistan's bowlers weren't the only ones feeling the pain.

A young boy in the crowd was left in tears after being hit in the hand by one of Warner's mammoth sixes.

An ice pack seemed to soothe the young boy's woes, but the Warner rampage continued as the 28-year-old approached his double century.

Warner's knock was brought to an end in the 38th over, but Maxwell picked up the slack to ensure Australia surpassed 400.

Afghanistan's openers resisted the initial onslaught from Starc and Hazlewood, but Johnson's introduction in the seventh over sparked a collapse of 3-16 to set Australia on their way.

Warner paid the injured boy a visit during the game to make sure he was OK.

"I didn't realise until I saw it on the big screen," Warner said.

"I gave him a pair of gloves and I signed them.

"I had a quick chat with him and his father. He had a bit of a bandage on him, but he's a bit better now.

"We ran into a freight train today," Moles said.

"We were outskilled - outbullied if you want to put it that way.

"They were exceptional, and we came up short. We hold our hands up, and there's no excuses."