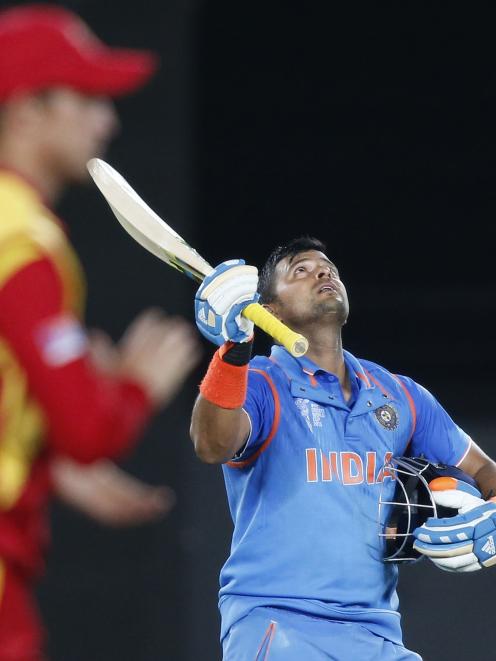 India's Raina celebrates scoring a century during their Cricket World Cup match against Zimbabwe at Eden Park in Auckland. Photo by Reuters.
A tournament favourite receives what appears a welcome challenge, almost ends up on the wrong end of an upset, but eventually chases down a testing total to progress from pool play unbeaten.

The script from Friday night in Hamilton was repeated 24 hours later at Eden Park as India survived a scare against Zimbabwe to advance to the quarter-finals with six wins from six.

Just like New Zealand's nervy victory over Bangladesh a night earlier, India's final match in group A wasn't quite as comfortable as they might have liked, allowing a few too many runs and losing early wickets to compound the problem.

But, just like the Black Caps, the heavyweights were roared on by a parochial crowd and reached their target of 288 with six wickets and eight balls to spare.

Suresh Raina (110 from 104) played the Martin Guptill role, stroking a fine century to help his side home, while able support arrived from MS Dhoni (85 from 76) as the pair compiled an unbeaten stand of 196.

India will now turn their attentions to Thursday's quarter-final clash with Bangladesh in Melbourne and, despite the narrow nature of their final group outing, the defending champions will be firm favourites to book a semifinal berth.

They have now won 10 straight Cricket World Cup matches, with tonight's triumph the toughest workout they have received at this tournament.

"It couldn't have been better," Dhoni said. "If you're playing the last game of the group stage and you get an easy win, you don't get a lot out of that game.

"What was good was the spinners got put under pressure and we also lost quick wickets initially and that actually put our middle order under pressure. We gained a lot out of it."

The waiting and watching Bangladesh could have also taken some confidence from proceedings, but they would be blessed in the quarter-final to both match Zimbabwe's performance and see India err as often as they did last night.

After all, Ravi Ashwin probably won't have a career-worst 75 runs plundered from his 10 overs, while Indian openers Rohit Sharma and Shikhar Dhawan are unlikely to be deceived by a MCG slow pitch like they were at Eden Park.

Virat Kohli will hope to avoid a freak dismissal that saw an attempted sweep catch the bottom of his handle then rebound onto the stumps, and the Bangladeshi batsmen may be unable to replicate the way Brendan Taylor took apart the Indian attack.

Taylor's brilliant innings of 138 gave his side hope of ending their tournament with its biggest upset, with the only downside the unfortunate fact the knock could be his last in a Zimbabwe uniform, having signed a three-year deal with Nottinghamshire. It was, at least, some way to bow out, becoming the only Zimbabwe batsman to score consecutive centuries at the Cricket World Cup.

"To get a hundred and lose doesn't make it as sweet," Taylor said. "Their bowling attack made it difficult so it was up there [as an innings] but unfortunately it was in a losing cause."

The fairytale could possibly have been complete had Hamilton Masakadza taken a regulation catch when Raina was on 47. But the ball fell to the grass, the mistake soon translated to India's highest partnership at this tournament, and the champs marched on.

Meanwhile, Australia thumped Scotland in Hobart yesterday to head to the quarter-finals on a high. Scotland were skittled for 130, with Mitchell Starc claiming four for 14, and Australia made light work of the chase, reaching the target in only 15.2 overs and for the loss of three wickets.