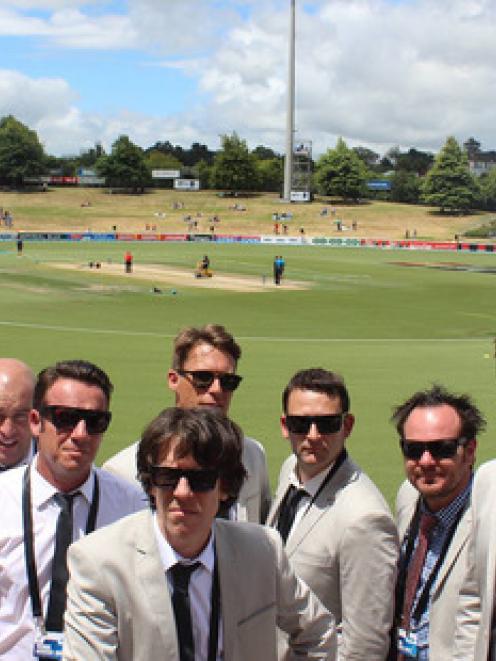 Leigh Hart, far left, as part of the Alternative Commentary Collective. Photo NZME.
Cricket's alternative commentary on the World Cup has been silenced.

The Herald understands the Alternative Commentary Collective, whose distinctive work from a caravan parked near the boundary at New Zealand's games this summer has become a feature of the international programme, have had their accreditation pulled by the International Cricket Council.

It is in response to an on-field stunt during the game between Afghanistan and New Zealand at McLean Park in Napier yesterday.

At a drinks break during the Afghanistan innings, comedian Leigh Hart, a member of the ACC, accompanied the drinks trolley onto the park.

That broke a rule about who is permitted onto the playing arena on a game day.

An ICC spokesman has told the Herald: "An individual went outside the agreed boundaries of an activation and appropriate action has been taken."

Earlier Hart confirmed to the Herald that he entered the ground during the drinks break and that it was part of a promotion for Gatorade.

"It was part of a promotional thing done by Gatorade, where they asked us to be on the drinks trolley. One of us was selected and it was me," he said.

The ACC are understood to be perplexed by the controversy, saying they were invited into the drinks trolley by tournament sponsors Gatorade, part of the Pepsi Cola group.

Hart's credentials were given to the ICC and ground operators the day before the match. Gatorade had been trying to get the ACC on to the trolley in other matches, but early finishes had prevented this from happening.

The umpires, Johan Cloete and Marais Erasmus, commented on Hart's attire and they engaged in small talk for a matter of seconds.

As drinks was wrapping up, Grant Elliott wandered past and asked Hart how he was going and he replied. None of the conversations were recorded.

A statement on the ACC Facebook page said: "For the record - there was no breach of protocol here. Leigh did exactly what was asked of him by operations officials - it was so innocuous it's boring."

However the ICC has taken a dim view of the stunt. It is likely there will be discussions with Gatorade over how a member of the commentary team was allowed onto the ground when strict protocols and security issues are regarded as paramount.