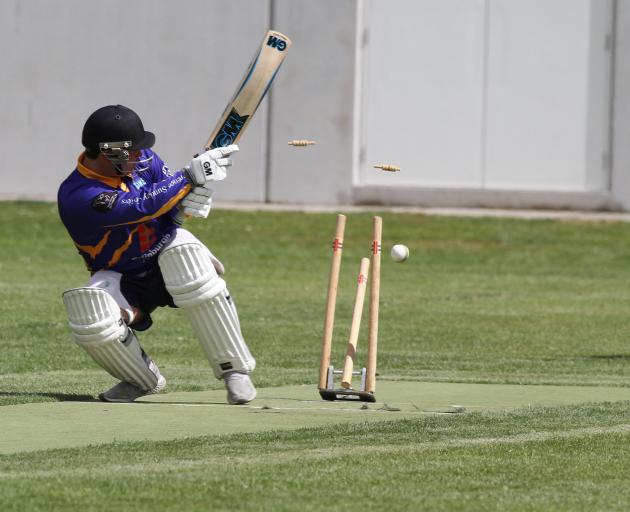 The side beat the Kai Kings by one wicket in a thrilling final at the Cosmic Bullring in Balclutha.

The Kings batted first and made 125 for eight off their 20 overs.

With both openers back in the sheds early on, William Casey and Mark Shepherd put together a nice partnership through the middle stages.

Lawrence spinner Jackson Miller tore through the middle of the Kings order but some late hitting from South Otago cricket veteran Blair Benington salvaged the Kings’ total and gave them a defendable score.

Casey top-scored for Kai with 35, while Benington was next best with 30.

Jackson Dempster recorded the best bowling figures for Lawrence with three for 15 off four overs.

In reply, Lions opening batsman Mitch Pryde did not waste any time getting his eye in, scoring three sixes and two fours early.

Two sixes ended up on the roof of the grandstand off the bowling of Jason Young.

Pryde continued to dispatch the Kings bowlers and made his way to 53 before being dismissed.

Sam Wyber produced another useful cameo for his side before Kai came back into the game in the middle overs.

Pat McKenna bowled extremely well, bagging four for 21 off his four overs, and looked to have done the job for his side.

Jackson Dempster came to the crease with Lawrence needing fewer than 20 runs to win off five overs. He batted very smartly with the tail and showed a cool head when the pressure was on.

Death bowling specialist Lilly Paterson was brought on late in the piece and also looked like nabbing the victory for Kai; her figures of two for five off two overs brought Kai one wicket away from victory.

But Dempster held his nerve and hit the winning runs in the final over of the match.

The Clutha Comets beat the Owaka Bandits by five wickets in the playoff for third.

Owaka batted first and made 175 for three off its 20 overs.

In reply, the Comets chased the score down with an over to spare thanks to a solid partnership between Morgan Lindsay (41*) and Jared Crawford (22*).

The 40-over competition starts next weekend for two weeks before stopping for the Christmas break.