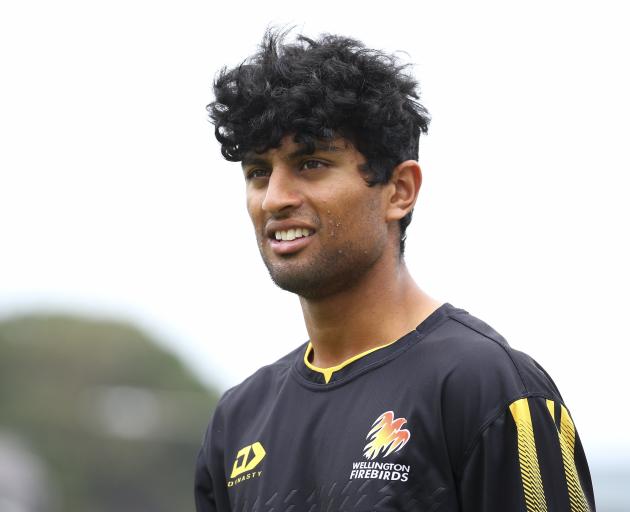 Rachin Ravindra. PHOTO: GETTY IMAGES
Otago is sliding towards defeat in its opening Plunket Shield game of the season in Wellington.

After a rain-delayed third day at the Basin Reserve yesterday, Wellington is 95 without loss in its second innings, needing a further 98 runs to win.

Run rate clearly won’t be a factor — the Firebirds have at least 96 overs to play with — so the only thing that can save Otago is more rain, and lots of it.

The Volts added 17 runs to their overnight score of 143 for seven yesterday before rain stopped play.

After the resumption, at 3pm, Wellington fast bowler Nathan Smith mopped up his old side’s tail, finishing with wickets in consecutive balls and career-best figures of six for 54 (nine for the match) as Otago was dismissed for 180.

The Firebirds had no need to hurry their final innings and duly played safely to the close.

Opening batter Rachin Ravindra had to leave with an injury after copping a blow from Otago seamer Travis Muller.

But Luke Georgeson calmly moved to a third first-class 50, and he and Troy Johnson (23 not out off 73 balls) will look to tick off the required runs today.

In Christchurch, the scene is set for a potentially dramatic final day if the home side is willing to chance its arm.

Greg Hay scored his 14th first-class century to guide the Stags to 321 for six in their second innings before they declared.

Dunedin completed a clean sweep at the under-19 regional girls tournament in Oamaru with a crushing 143-run win over Southland yesterday.

Hannah Wilson then claimed three for five, and Deerness and Anna McClean each grabbed two wickets, as Southland was bowled out for 33.

North Otago beat Otago Country by 94 runs. Katelyn Walton (33) and Jayde Reed (four for 24) starred for the home side as it posted 165 batting first then rolled Country for 71.