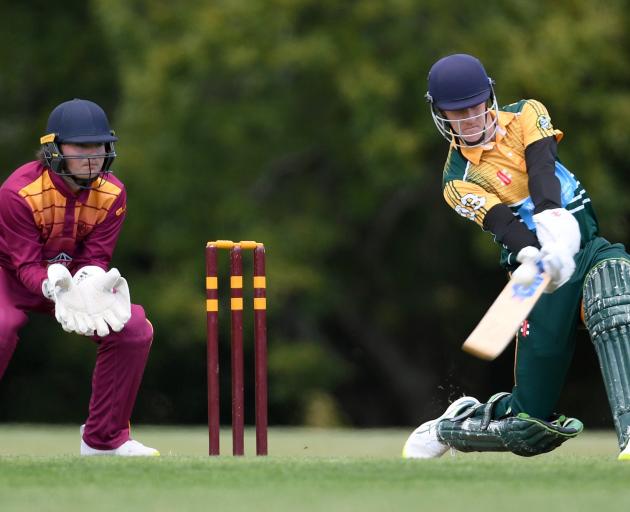 Green Island batter Nick Parata swings for the fences during his innings of 49 not out against North East Valley at Sunnyvale on Saturday. Watching is Valley keeper Nic Brosnahan. PHOTO: STEPHEN JAQUIERY
Dunedin premier cricket resumed with a round of twenty20 games on Friday night and 50-over games the following day.

The final round of the one-day competition is this weekend. There will be a couple of weeks off before declaration cricket resumes on February 19.

Jake Gibson got some handy help from the tail-enders as he played the key role for Green Island in its narrow, and mildly controversial, win at Sunnyvale.

Gibson led the Swamprats with 61 off 67 balls, hitting four fours and four sixes as the home team made a handy 251 for nine.

Things had looked grim for Green Island when it slumped to 13 for three but Gibson and a patient Joel Meade (38 off 62) started the recovery.

Green Island looked on track for merely a moderate total when it reached 179 for eight before the tail gave a heck of a wag.

No 9 batter Nick Parata thrashed four fours and three sixes in his unbeaten 49 off 45 balls, and he and Jamie MacDonald (34) added 72 for the ninth wickets before MacDonald was bowled off the final ball.

Otago Volts seamer Travis Muller led the North East Valley attack with four for 26 off 10 overs, and fellow provincial representative Jarrod Mckay backed him up with three for 34.

North East Valley had its innings cut to 45 overs as it was punished for a slow over rate, a rare sight in club cricket.

Rising star Thorn Parkes did everything he could to guide the Swans to victory, scoring a classy 92 off 119 balls (11 boundaries), and Will Kindley added a zippy 60 off 55 balls.

Both batters fell to the bowling of Geordie Scott and North East Valley came up just short.

Adam Jones capitalised on an excellent start to lead Bing Harris Shield leader Taieri to a comfortable win at Brooklands.

Taieri openers Harry Marshall (48 off 35 balls) and Beckham Wheeler-Greenall (46 off 41) had put on an entertaining 89 for the first wicket.

That set the platform for Jones, who stroked seven boundaries in his unbeaten 61 as victory was achieved in the 40th over.

Wheeler-Greenall began his excellent day with four for 20 for Taieri, while both Regan Flaws and Riley Dixon grabbed two wickets.

Max Griffith and Tim Ford dug Albion out of a dreadful hole at Tonga Park before Matt West completed a wonderful all-round performance.

Albion had slumped to 18 for four against Carisbrook-Dunedin/Kaikorai when the first pair staged a brilliant rescue job, scoring 114 for the fifth wicket.

Griffith made 58 (four fours, two sixes) and Ford 55, leaving West (44 off 43) to finish the job as Albion made a total that seemed far out of reach after the first hour.

Pat Arnold was the best of the CDK bowlers, taking four for 30 off his 10 overs.

A handful of CDK batters then got starts but it needed someone to score big, and after Ricki Allan and James Brown each grabbed two wickets, West sealed man-of-the-match honours with four for 34 off 10.

In Friday night’s T20 round, Otago opener Josh Tasman-Jones thrashed 58 off 36 balls to lead Albion to an 80-run win over University-Grange.

Albion made 173 for four, and Wenkat Kotte took two for 34 as University-Grange struggled to 93 for nine.