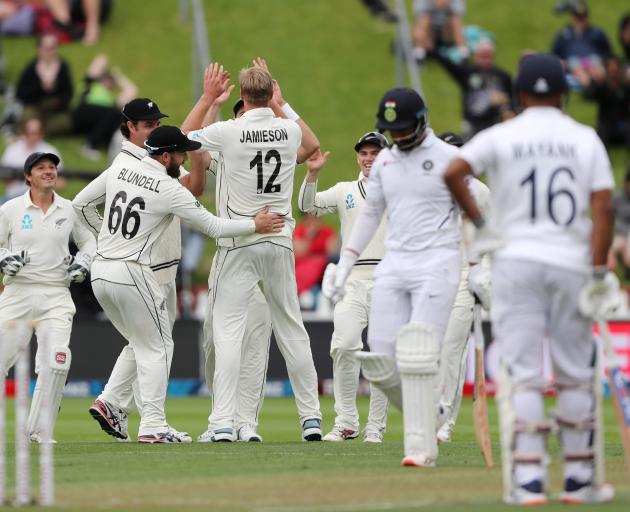 Before even considering the nerves and uncertainty that comes with a debut in the pinnacle of cricket, or the unknown of a step up to the top level, Jamieson's task in the Black Caps' first test against India was already significant, purely from the company he was keeping.

Facing a top order that had dominated bowling attacks on their way to seven consecutive test victories - a top order in which the worst batsman averages 43 - all of the Black Caps bowlers had their work cut out for them, let alone the rookie wearing the newest test cap, emblazoned with number 279.

Instead, daunting debut or not, Jamieson was the star performer on day one of the first test at the Basin Reserve, claiming 3-38 to give the Black Caps just the start they were after in what could be a summer-saving series.

The 25-year-old took a wicket in his third over of test cricket, then another in his fourth, and one more in the ninth for good measure, as he ripped through the vaunted Indian top order, reducing them to 122-5 when rain forced an early close of play at tea.

Helped by a green Basin wicket that always offers assistance to seamers on the first day, and by a won toss from Kane Williamson, Jamieson was introduced in the 13th over after Tim Southee had skittled Prithvi Shaw. He quickly sent Cheteshwar Pujara packing for 11 – squared up and caught behind with a full ball that straightened - before claiming the biggest scalp of all, Virat Kohli, who slashed an edge to Ross Taylor at first slip to depart for just two.

Jamieson's fist-pumping roars showed how much it meant, and his success was aided throughout his two lengthy spells by Colin de Grandhomme, who slammed the breaks on any potential scoring with a probing line that didn't allow many cheap runs, something the whole bowling unit – a brief wayward Trent Boult spell aside – excelled at.

Ajinkya Rahane (38 not out) and Mayank Agarwal (34) helped rebuild after Jamieson left India in a muddle at 40-3, but Boult lured Agarwal into a rash shot – caught in the deep by, who else, Jamieson - and in between a bouncer barrage reminiscent of the man he replaced, Neil Wagner, Jamieson then pitched a ball up and drew the edge of the in-form Hanuma Vihari, to reduce the visitors to 101-5.

Surviving it all was Rahane, who was the only batsman to look comfortable in the breezy bowler-friendly conditions. Rishabh Pant will resume alongside him on 10, but looked completely at sea to Jamieson's back-of-a-length offerings, and after all-rounder Ravichandran Ashwin at No 8, the Indian seamers aren't likely to provide much resistance with the bat.

With the ball, however, the Indian seam trio, and their combined 157 tests of experience, would do well to emulate the efforts of New Zealand's rookie. And, after Jamieson's dream day put the Black Caps on top, they might need to do just that to get back into the contest.