Johnson smashes ball to all parts in lightning 256 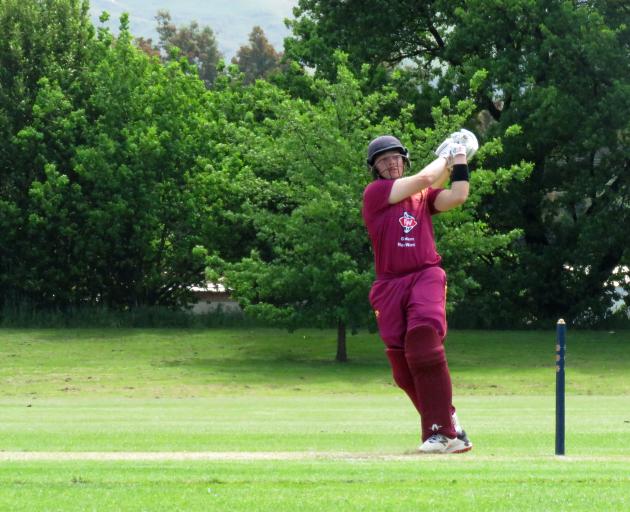 North East Valley batsman Llew Johnson swats a another deliver in the direction of the boundary during a staggering knock of 256 not out against University-Grange at Memorial Park on Saturday. PHOTO LIANE TOPHAM-KINDLEY
Bang. Wallop. Crash.

North East Valley opener Llew Johnson sent the ball flying around Memorial Park during a scarcely believable knock of 256 not out against University-Grange on Saturday.

In all likelihood, it is a Dunedin premier grade club record.

Club statistics are patchy at best but it is doubtful anyone else has flogged more than 250 runs in a one-day game.

The 20-year-old right-hander swatted 21 sixes and 15 fours. Just take a moment to process that.

He clubbed 126 runs in sixes alone. And he has clouted another 60 runs in fours — it is mind-blowing stuff and utterly devastating if you were in the bowling attack.

Johnson could not be reached for comment yesterday. But team-mate and captain Will Kindley had a front-row seat for a good portion of the innings.

The pair put on 107 for the first wicket and Kindley said it was far from the bang-wallop-crash approach you might expect.

Early on, Johnson was patient, watchful and selective.

Not every delivery got the special treatment. He was not afraid to pull out a defensive shot.

"He was positive and looked to play his shots but he was playing good cricket shots and making sure the ball was there to hit," Kindley said.

"Towards the end of the innings he certainly started to ramp it up a bit. I don’t know what he scored that last 100 runs off but it can’t have been many balls.

"But they were pretty much all good cricket shots and it was impressive to watch."

Johnson faced the first and last ball of the innings, and 154 in total, which is testament to his concentration.

He made his debut for Otago as a 17-year-old. He replaced Jimmy Neesham in the Volts twenty20 line-up in January 2018 and played three matches.

While he was unable to capitalise on those opportunities, he remained on the fringe of the side and impressed with a century for Otago A late last month.

That innings did not go unnoticed by the Otago selectors and Saturday’s effort will have seen his stocks surge.

The knock helped his side post a formidable total of 387 for six. University-Grange was 115 for seven when the rain arrived.

Valley recorded a 202-run win by the Duckworth-Lewis-Stern method.

Former North East Valley player Simon Beare scored 201 not out during a declaration match in February 2006. Johnson will replace him at the top of the list.

"As far as I’m aware, it is well above our club records for batting," Kindley said.

"I’d say that record will stand for a while now."