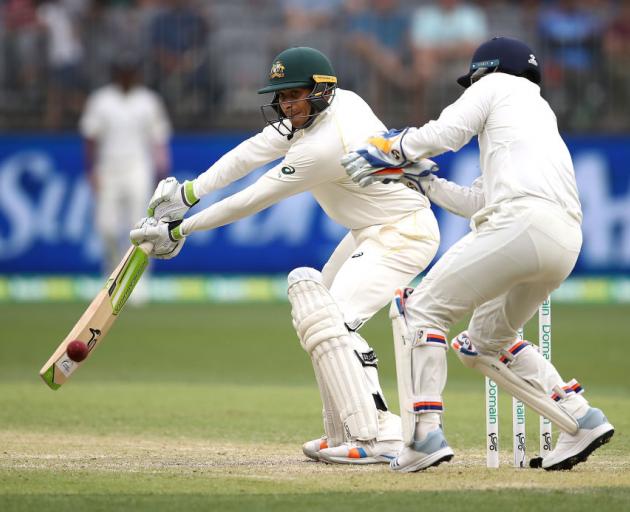 Usman Khawaja of Australia bats during day three of the second match in the Test series between Australia and India at Perth Stadium. Photo: Getty Images
Nathan Lyon hopes to provide a desperately-needed tonic for Australia’s beleaguered supporters after the veteran off-spinner's five-wicket haul helped his side build an ominous lead in an enthralling second test against India.

On a grassy Perth Stadium pitch, dubbed a ‘paceman’s paradise’, Lyon stole the show to be the pick of Australia’s bowlers with 5-67 from 34.5 overs in India’s first innings of 283.

Australia were 132 for four in their second innings, a lead of 175 runs at stumps on day three.

Lyon has claimed 13 wickets in the series to continue his stranglehold over India as a desperate Australia seek a series-levelling victory after a narrow first-test defeat in Adelaide.

“He’s one of the greatest of all time to ever play the game and to get recognised from him is a massive honour,” Lyon told reporters.

Lyon also moved past South Africa great Allan Donald and into 25th place on the all-time test wicket-takers list with 331.

“I don’t think I’m at the top of my game yet. I believe there is a lot more around the corner for me.”

A cult hero in Australia, Lyon has been nicknamed the "GOAT" (Greatest of All Time) and has an opportunity to provide cheer for a nation still reeling after the damaging Newlands ball-tampering fiasco.

“Playing test cricket for Australia, we have an opportunity to become heroes,” he said.

“That is something that sits very special to me that you can go out there and make a lot of people happy if you stand up.”

Lyon remained confident that Australia would snap a run of six tests without victory.

“I would rather be in Australia’s change rooms than India’s,” he said. “We know we have the bowlers that can defend (the total)."