Martin out to stifle English resurgence 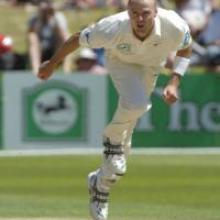 New Zealand was unable to take an unbeatable 3-0 lead at Eden Park after failing to replicate its compelling form in Wellington and Hamilton.

The Black Caps are desperate not to hand England the opportunity to claim the five-match series in Christchurch on Saturday with another below par performance at McLean Park.

Martin, New Zealand's bowling spearhead, said the bowlers' priority since arriving in Napier was to ensure England's newfound momentum at the crease was short-lived.

‘‘For us, it's a matter of coming to them with something different in the next game and making sure any momentum they grabbed from game three is extinguished early on,'' he said.

‘‘They've been coming at us the same way throughout the series and in the third game they actually put it together,'' he said.

Both attacks would be busy analysing their opponents weaknesses from now until the return series in England ends in late June.

‘‘It's just a constant five-month battle we're going to have with these guys, with plans and ideas and the way we attack each game,'' he said.

New Zealand's plans worked a treat in the first two games, where England was dismissed for easily achievable totals of 130 and 158.

However, Bell, Pietersen and Collingwood fired at Eden Park as England chased for the first time, clinically reaching its target of 229 with six wickets and three overs to spare.

Martin did not describe the setback as a wake-up call, rather a reminder the bowlers had to keep rethinking their modes of attack.

‘‘These guys have areas on the park where they try and hit you so you have to figure out what varieties are going to work best,'' he said, before happily detailing his strategy for England's left-handed openers.

‘‘I think [Alastair] Cook has struggled to left armers around the world, so that angle he's struggled with. As far as [Phil] Mustard goes, it's just to cramp him and make sure he hasn't got too many areas in the park to hit.''

Martin, who has claimed both openers once during the series, nominated Pietersen as his biggest challenge.

‘‘He's tall and he tends to hit good-length balls on the top of the bounce. That's makes you wary of the lines and the lengths you have to hit ,'' Martin explained.

‘‘There's a very small margin for error. At this stage we're keeping him under wraps a little, he hasn't broken out completely yet, but we're aware he's a very good player.''

Martin, rarely seen in the ODI arena until the unavailability of Shane Bond, said he was encouraged by his limited overs form though none for 45 off seven in Auckland was not his finest hour.

‘‘The first couple of games, with a couple of top-order wickets was really the ideal way for me to contribute. Perhaps the third showed the evil side of my game at times.

‘‘I bowled some not too good stuff every now and then, but I think I did come back pretty well,'' the 33-year-old right armer said.

‘‘As far as confidence goes it's still there and I'm enjoying the role. It's one Kyle Mills and I are going to have to be pretty good at in the next game.''

Both sides had their first serious net session at nearby Nelson Park yesterday - a valuable exercise given the three-day break between games allowed for a settled training regime.

‘‘It's the first opportunity in the series to get a practice in so a lot of the guys who have been struggling have had a chance to get it out of their system,'' Martin said.

Unfortunately, an out-of-sorts Peter Fulton did not arrive from Christchurch before the session ended, another setback after rain ruined his chances of batting for Canterbury against Otago on Sunday.

On the medical front, Jesse Ryder's ankle injury did not prevent him from batting in the nets, though he was not fully involved in the fielding drills. A call on his availability will be made before the toss.