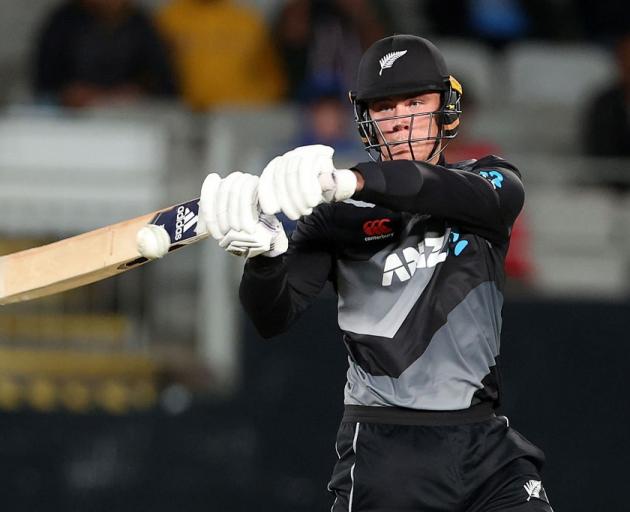 Finn Allen hit 10 fours and three sixes in his knock for the Black Caps. Photo: Getty Images
Approaching 9pm, the prospect of any cricket in Auckland appeared fanciful at best.

By 10pm, Finn Allen (21) was walking off Eden Park with 71 next to his name after 29 balls of futuristic cricket last night.

Allen's maiden 50 was the centrepiece of the Black Caps' imposing 141-4 off the allotted 10 overs as the Black Caps put a bold-type exclamation point on their extraordinary season.

It was always going to be a tall order to chase it down. After eight overs Bangladesh were 70-8 needing 36 an over off the final two to win – not impossible, but pretty tricky all the same.

They ended a miserable tour by being dismissed for 76 in 9.4 overs, handing New Zealand the win by 65 runs and taking their record at home against Bangladesh to 32-0.

It means that New Zealand played 21 matches this summer, winning 17, losing three and a no result. They won all seven series, clean-sweeping four of them (and likely robbed by rain of making that five).

They did it while playing half the matches without their best batsman and while rolling out some experimental line-ups.

That they got a match in at all tonight was crazy. Auckland was doused in heavy rain for most of the day, with the weather accounting for the T20 decider between the White Ferns and Australia after just 17 balls.

It might be the wrong shape for a cricket ground but you cannot fault the surface. Turned out the New Zealanders weren't much interested in hitting the ball along it. They preferred the room up in the air.

Ten overs with 10 wickets in hand means batsmen can approach the task with clarity of thought. That thought is: hit every ball as hard and as far as you can.

That doesn't require a huge mindset shift for Allen, but what it does do is remove any consequence of failure. Out early, cest la vie.

It's a liberating feeling and Allen and Martin Guptill batted like libertines.

After five overs of swings and mostly hits, they'd put on 69 with five sixes between them, one a 95-metre monster high into the West Stand by Guptill.

They were separated four balls later, by which time the score had advanced to 85 and Guptill had cleared the rope twice more. He departed trying for another – but his 44 off 19 hadn't just set the table, he had helped dish out the main course too.

Bangladesh it has to be said, took their comic routine in the field to extraordinary lengths. At least five skiers found the turf, some without the fielder standing under the ball.

Their "efforts" were put into context after five balls of their chase when Tim Southee showed incredible athleticism to take a return catch to dismiss Soumya Sarkar for 10. With his next ball he clean bowled Liton Das.

Todd Astle enjoyed a nice return to national colours, the leggie picking up two wickets in his first over, two in his second and finishing with 4-13, while Southee finished with 3-15.