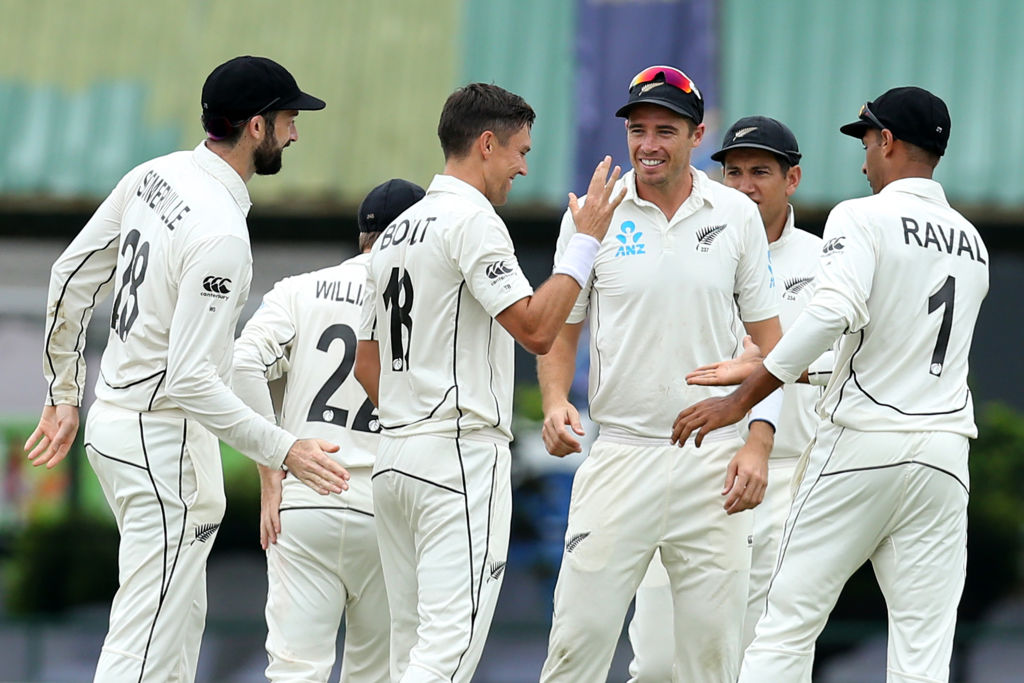 New Zealand's Trent Boult (C) celebrates with teammates after taking the wicket of Sri Lanka's Angelo Mathews. Photo: Getty
A pair of double-wicket maidens put the Black Caps in command on day two of the second test against Sri Lanka – until it rained.

Trent Boult and Tim Southee both produced superb overs to put New Zealand on top at lunch, reducing Sri Lanka to 144-6 before the rain that has disrupted the test returned, washing out the remainder of the day's play to leave just 66 overs bowled in the first two days, and a draw the most likely outcome.

That would not only leave the Black Caps with their first test series defeat since March 2017, but would be an inauspicious start to their World Test Championship campaign, with 20 points out of a possible 120 their return if rain continues to hamper the test.

To get their desired result, the Black Caps will need to repeat the bowling performance that they produced in the 29.3 overs of play available on day two.

Boult removed Angelo Mathews and Kusal Perera in his pivotal over, with Mathews surprised by a short ball down legside, playing the pull stroke too early and feathering an edge through to BJ Watling.

It was Boult's 250th test wicket — he is just the third New Zealander to reach that mark behind Richard Hadlee (431) and Daniel Vettori (361) — and his 251st came four balls later, when Perera tried to bizarrely shoulder arms to a delivery that cannoned into his pad. He departed for lbw for a duck, and Sri Lanka had quickly slumped to 93-4.

Also bringing up a milestone wicket was Southee. After Sri Lanka rebuilt to get to 130-4, Southee claimed the key wicket of Dimuth Karunaratne for 65, the Sri Lankan skipper driving at a delivery that seamed away, offering an outside edge, and watching on as Watling took a simple catch.

Much like Boult, and many bowlers in this series, one scalp brought two, as three balls later, Niroshan Dickwella attempted a similar drive with no foot movement, and suffered the same fate as his captain, with Southee picking up his 500th international wicket — also just the third Kiwi bowler to hit that milestone, behind Vettori (696) and Hadlee (589).

They were just rewards for a pairing that didn't get much assistance from a spin-friendly wicket in Galle, but made the most of conditions in Colombo; the same venue where they shared 15 wickets in New Zealand's most recent test victory on Sri Lankan soil, in 2012.

By lunch, only three Sri Lankans had reached double figures, and one of them was extremely fortunate to do so. Dhananjaya de Silva made it through to 32 at the break, but was given the ultimate let-off on nine, with Boult dropping one of the easiest catches in cricket history.

A leading edge went straight up into the air, and Boult waved away his fielders to take what looked to be the simplest of return catches. Somehow, the ball spilled out, leaving everyone in shock — most of all Boult — and de Silva allowed an incredibly fortuitous second chance.

He and Dilruwan Perera fended off eight overs to make it to lunch without further Black Caps inroads, but with their run rate oh so slow — 59 runs were added in 29.3 overs in the first session — both sides will need to get a move on if the weather allows this weekend.