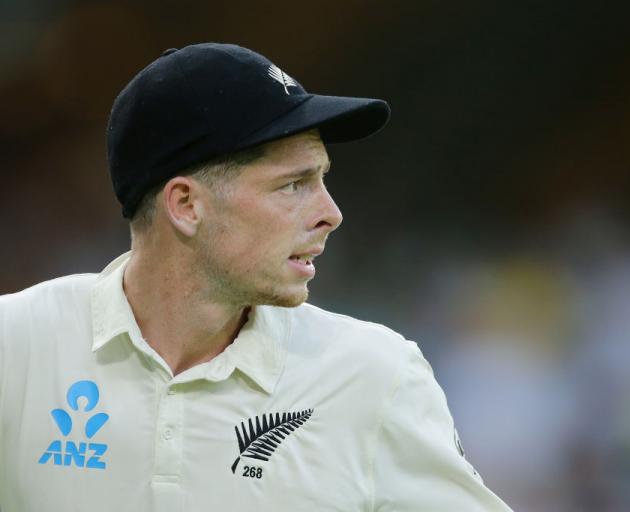 It was just over two months ago that Santner inspired the Black Caps to their 99th test victory, but his struggles in their subsequent failures to reach three figures have seen him dropped from the side.

A maiden test century - 126 - and three fourth-innings wickets against England at Mount Maunganui made it seem as if Santner had finally delivered on his all-round potential, but in the three tests since then has taken two wickets while leaking 338 runs, and scored just 55 runs in five innings.

His battles with the ball culminated in wicketkeeper Tom Blundell being preferred for a stint during the Boxing Day test, before illness meant Santner played no part in the third test in Sydney, as Todd Astle and Will Somerville were preferred.

However, the red-ball retirement of Astle and injury to Somerville meant that Santner had a chance of retaining his spot in the squad for the two tests against India, but the selectors have opted for Ajaz Patel instead.

Patel may not even play against the world's best test side – his prior two appearances at the Basin Reserve and Hagley Oval, where the two tests are being held, produced no wickets in 40 overs - but he proved economical in those stints.

That has usually been Santner's strength – offering restrictive bowling lines on unfriendly wickets, as well as a lineup-balancing batting option. But, with the all-rounder having struggled for economy and runs in Australia, it weakened his argument for selection, with Patel earning the sole spinning spot.

If the Black Caps opt to bypass Patel and play four seamers - a distinct possibility at the Basin Reserve - a debut could be in order for Kyle Jamieson. Lockie Ferguson's return to domestic one-day cricket after a calf injury was not enough to prepare him for two tests, while Jamieson has been picked over Matt Henry and his 50.1 test bowling average.

Trent Boult has been ruled fit however, and will link up with usual seam-bowling partners Neil Wagner and Tim Southee, while Daryl Mitchell will provide options as squad cover after a strong test debut with the bat in against England Hamilton, and impressive recent form for the New Zealand XI and New Zealand A.

Tom Blundell will remain at the top of the order alongside Tom Latham after his MCG century, with Jeet Raval dropped.

Black Caps coach Gary Stead acknowledged some tough decisions had to be made.

"With a squad of 13 we've put a priority on balance and making sure we have the needed variety and different options depending on the pitch conditions at the Basin Reserve," said Stead.

"Kyle will offer us a point of difference with the bounce he could extract on what is traditionally a good surface in Wellington.

"We're excited to welcome back Ajaz who has done a great job for us overseas and has a proven domestic record in New Zealand conditions.

"Daryl showed his batting prowess in his Test debut against England in Hamilton and he naturally offers us great versatility with the different roles he can play."

The first test begins in Wellington on Friday, with the second in Christchurch on February 29.