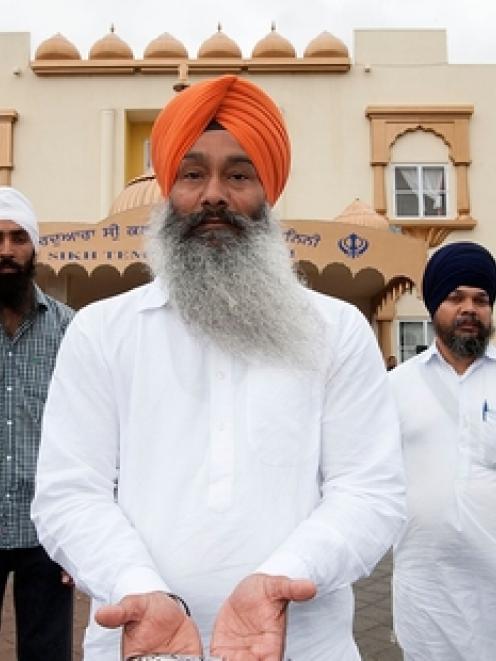 Cricket fans (from left) Karamjeet Singh, Daljit Singh, Karamjit Singh, Trilok Singh and Prabhdeep Singh were refused entry to the India-Zimbabwe game on Saturday because they would not remove their kirpans.Picture / Chris Loufte
Seven Sikh cricket fans were barred from entering Eden Park to watch India play Zimbabwe in a Cricket World Cup match on Saturday because they were wearing kirpans.

The kirpan is a ceremonial sword carried by Sikhs for religious purposes, but is considered by the International Cricket Council to be a weapon.

Daljit Singh, chairman of the Supreme Sikh Council, said many in the Sikh community were unhappy with the decision and the council was considering taking legal action against the ICC.

"This decision has huge implication because we have about 500 in our community who already bought tickets for the semifinals, and are now worried that they cannot get in," Mr Singh said.

"We have been told that under NZ law it is legal to carry a kirpan, but this ban is being imposed by the ICC which we feel should follow the law of the land."

In a letter dated September 5 last year, Acting Minister of Justice Christopher Finlayson said it was lawful to possess a kirpan in public.

He said the kirpan may be considered an offensive weapon "only if made or altered for use for causing bodily injury" or if it was "intended to be used to commit an offence involving bodily injury or the threat or fear of violence".

"In the absence of such a purpose, alteration or intent, mere possession of a kirpan is not an offence," Mr Finlayson said in the letter.

But ICC spokesman Philip Clark said the council considered the kirpan to be a knife, and those wearing it would not be allowed inside any cricket stadiums.

"Our ticketing terms and conditions prohibit entry to the venue of any type of knife ... that rule does extend to kirpan," he said.

Mr Clark said random security checks picked up seven fans wearing kirpans from two Sikh groups. They were denied entry after they refused to remove their kirpans, but were given refunds for their tickets.

"Our no knife, no kirpan policy extends to all games across New Zealand and Australia," Mr Clark said.

"There's obviously more awareness of the issue around the India games, because of the Sikh community, and for that reason we had consulted police and had a Sikh community police present at the gate."

Karamjit Singh, 40, said last Saturday was the first time he had been stopped from entering a game in his 16 years of watching cricket in New Zealand. "The kirpan is one of the pillars of our Sikh faith, and I have been to all games in the past with no issue," he said.

Daljit Singh Sekhon, 25, said he started wearing the kirpan when he got baptised and it was like "part of the body".

"I don't ever remove it and even when I shower I tie it to my head ... to be asked to remove the kirpan is insulting, not just to me but to all Sikhs," he said.

Race Relations Commissioner Susan Devoy said the tournament organisers had offered to take care of kirpans while their owners were at the game. "This is a similar policy to the one used by many airlines," she said. "We need to keep talking with Sikh Kiwis. Balancing rights isn't easy."

By Lincoln Tan of the New Zealand Herald