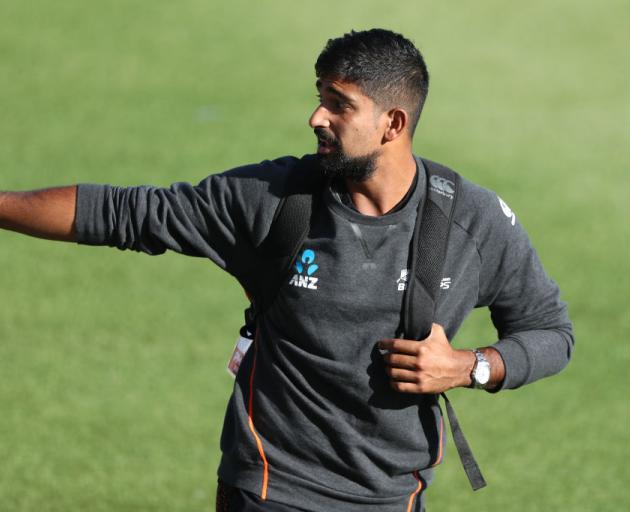 Ish Sodhi. Photo: Getty Images
Black Caps spinner Ish Sodhi wants to do more to ensure the eradication of racism, regardless of how long it takes.

The discussion of racism in sport now sees cricket at the crease, after a spine-tingling message about the issue by commentators Michael Holding and Ebony Rainford-Brent.

Former West Indian fast bowler Holding and ex-England player Rainford-Brent, both calling the first test between England and the West Indies for Sky Sports in the UK, this week delivered some of the most powerful TV viewers had ever seen, sharing their own experiences on the matter.

"Diversity for me is something I've grown up with and it's something I'm lucky to have been exposed to at such a young age," Sodhi told Newstalk ZB's D'Arcy Waldegrave. "I know I probably haven't done enough as I would like and expect myself to do, in terms of getting in the community and engaging with different ethnicities."

"I don't really see it as a responsibility. It's pretty cool that I'm a player of Indian origin who represents New Zealand. And I'm not the only one, we've had Jeet Raval, Ajaz Patel, we've had Mark Chapman and he's got a Chinese mum, we've got players born in South Africa like Neil Wagner and BJ Watling, so the diversity is there. It's just a matter of engaging more of those people at a grassroots to show them that there is a pathway for people of all origins to make cricket a career."

NZC last summer had to resolve its own racism issue, after England fast bowler Jofra Archer was racially abused by a member of the crowd during a test match in March.

The man was subsequently banned from attending international and domestic cricket matches in New Zealand for two years.

"There's no space for that, and when someone comes to our country, we want to create the best experience for them. Incidents like that get dealt with pretty quickly," said Sodhi.

"Ignorance is the worst thing. And at the moment social media is so big so the conversation is open.

"But the danger is people want the change here and now. They expect a 180-degree shift instantly and that's quite dangerous, as it can create some aggression or confrontation that doesn't sit well. But if we can look at it like a progressive thing and start that conversation now and educate as much as we can, and look at it as a long-term thing, we'll start to see the benefits from it. It might be 10, 20, 30, 40 years, but as long the work's done now, we'll benefit from it in the future."