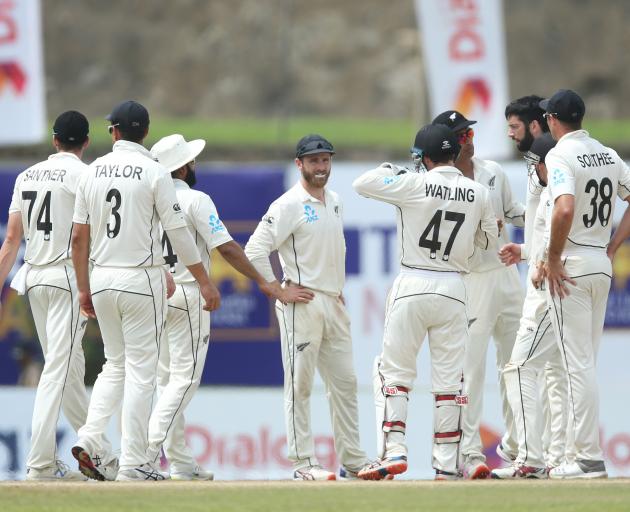 The Blacks Caps have lost their big chance to go to the top of the world test rankings with a disappointing loss to Sri Lanka in Galle. Photo: Getty Images
The Black Caps' historic winning streak is over, and so are their chances of becoming the best team in world cricket.

Having won five consecutive test series, New Zealand had an opportunity to be ranked World No 1 for the first time in their test history, if they managed to beat Sri Lanka 2-0 in their two-test series.

That feat is no longer possible, after Sri Lanka took out the first test in Galle by six wickets to ensure they cannot lose the series.

They did so in mightily impressive fashion, chasing down 268 in the fourth innings – something that had only happened seven times in tests since 2008. Make it eight, now, with Sri Lanka having proved masters of the chase of late, having accounted for three of those chases since 2017 alone.

While sitting atop the world rankings would have been a nice accomplishment for the Black Caps to bask in, it is frankly rather irrelevant now, given the implementation of the World Test Championship. But, even there, they have not started well, with Sri Lanka notching 60 points for their first test triumph, and the Black Caps stuck on zero.

It was exactly what was deserved after a fantastic fourth innings performance from the hosts. Captain Dimuth Karunaratne led the way with his ninth test century, making 122, and adding 161 for the first wicket with Lahiru Thirimanne.

From there, it was always unlikely that New Zealand could turn it around, even given fifth day conditions and a relatively long Sri Lankan tail. In the end, they couldn't even expose that tail; left to rue a wicketless end to day four where they put down several chances – of varying difficulty – which could have removed the Sri Lankan openers.

They eventually broke through to dismiss Thirimanne, trapped lbw by Will Somerville. Kusal Mendis came to the crease, smashed a four and a six, then was caught at mid-wicket off Ajaz Patel to conclude a strange six-ball cameo.

Even at that stage, Sri Lanka still had eight wickets left, and only 94 further runs required, and any prospects of a famous collapse were blunted by Karunaratne, who guided his side within 50 before flaying an edge through to BJ Watling from the bowling of Tim Southee.

The odd nervy moment remained – Kusal Perera survived two reviews and a Trent Boult yorker that somehow whizzed by off-stump, before holing out to Boult trying to finish the game in the hurry. However, his 19-ball 23 left just 18 more to accrue, and Dhananjaya de Silva and Angelo Mathews combined to dash any dreams of last-gasp heroics, and deny the Black Caps their chance at history.