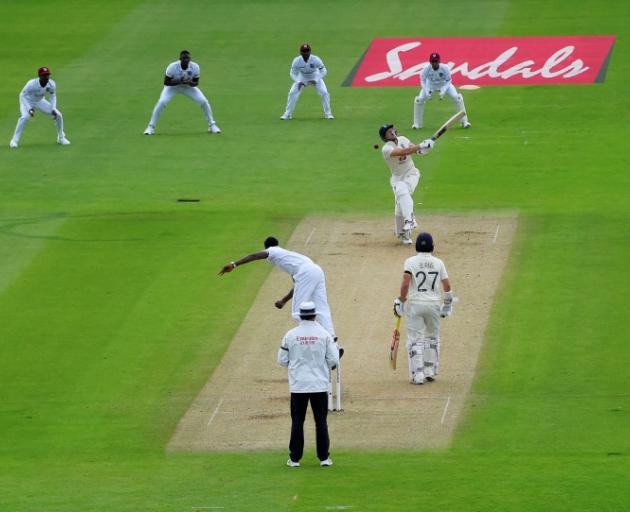 Rain and bad light restricted the first test between England and West Indies to 17.4 overs and the hosts closed a frustrating day on 35-1.

After all the anticipation, day one of the first of three tests turned out to be a damp squib.

If any fans had been allowed in they would have been jeering and complaining as the players remained in the pavilion for more than 90 minutes because of bad light, despite Southampton's Ageas Bowl having floodlights.

If that frustration, an issue administrators appear powerless or unwilling to address, was all-too familiar, much else about the occasion felt very different.

The match is being played in a "bio-secure environment" with daily health checks for everyone in the ground. There are home umpires - the first time in England since 2002 - and because of that each team have three referrals instead of the usual two per innings.

Players are not allowed to use saliva to polish the ball and umpires will not take jumpers and caps from bowlers.

After a rain-delayed start, players from both teams "took a knee" having observed a minute's silence to mark the victims of the novel coronavirus and former West Indies batsman Everton Weekes, who died last week.

England won the toss and opted to bat but soon lost Dom Sibley for nought after he left a Shannon Gabriel delivery which cut back to clip his off stump.

It looked a poor decision at any time but all the more so as in the previous over he had seen partner Rory Burns lucky to escape an lbw review after doing exactly the same thing.

After further rain delays, England eventually settled to their task. Burns was not out on 20 and Joe Denly on 14 when bad light brought them off in the 18th over - never to return.

Kemar Roach was the pick of the West Indies bowlers, giving up two runs from his six overs.

England's top order batting remains something of a work in progress but the strength in depth of their bowling options was illustrated by the decision to leave seamer Stuart Broad out of a home test match for the first time since 2012. Pace duo Jofra Archer and Mark Wood will spearhead their attack.

West Indies bowled steadily, without too many fireworks, but had little to work with on a damp day.

"It's been a bit tough, coming off and on," Gabriel said. "We just have to keep switched on when we come back on. It's been a tough day but we've been doing well so far."

On the ball that claimed the only wicket of the day, he added: "It was a good delivery after coming back from almost a year off in test cricket. It feels good to be back."