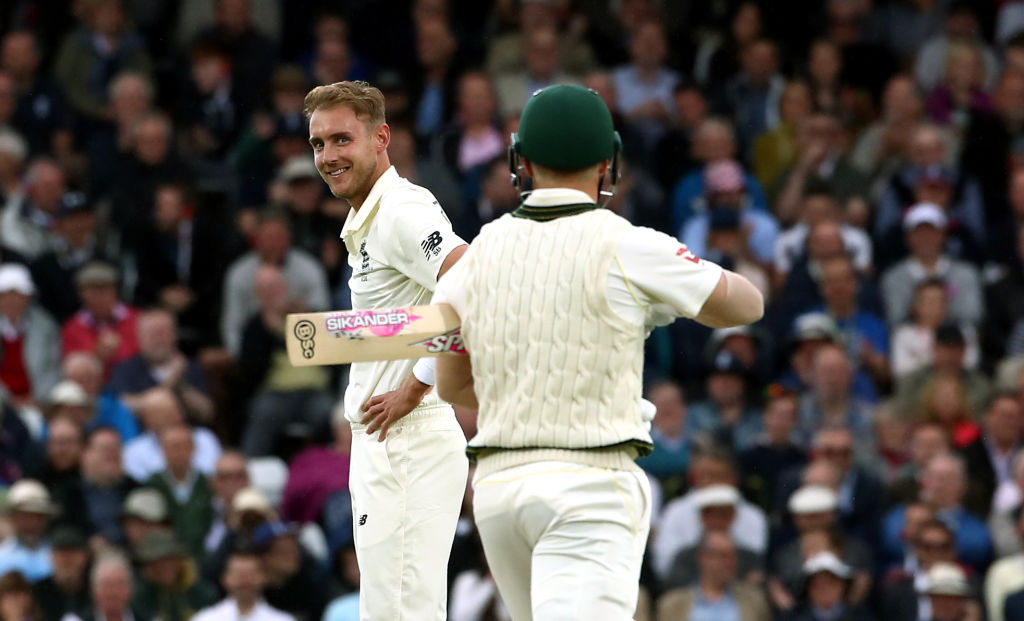 England's Stuart Broad (left) and Australia's David Warner during the third Ashes match at Headingley in Leeds. Photo: Getty Images
Stuart Broad haunted David Warner's mind throughout the Ashes and now the former vice-captain is one of many concerns in Australia's unsettled top six.

Steve Smith's test comeback from the Cape Town cheating scandal was a run-laden dream but Warner's was a record-breaking nightmare.

Warner managed just 95 runs in the five-test series, during which he was dismissed by Broad on seven occasions.

It is the lowest tally by an opener from 10 innings in any series in the history of test cricket.

Warner is expected to be retained at the top of the order when Australia's next test begins, against Pakistan at the Gabba, on November 21.

But the 32-year-old, in the midst of an unprecedented slump in a career that has featured 21 test tons, will be keen to register a big score early in the home season.

"They tend to come good, don't they? So he's had a tough series, no doubt.

"Usually with champion players they get a bit more time to come good ... I'm hopeful.

"There's plenty of upside still to his batting."

Langer pointed to Warner's mountain of runs in the Indian Premier League and World Cup as proof he still had it but admitted "he let Stuart Broad get into his head".

"He thought way too much about it," Langer said.

"I've seen it before. Even with the great players ... Gilly (Adam Gilchrist) with Andrew Flintoff.

"I used to have it against Murali (Muttiah Muralitharan) and I couldn't solve the issue.

"It's so hard when you try to problem solve in the middle of a big series ... he'll probably be very relieved he gets on the Qantas flight in a day's time and doesn't have to face Stuart Broad for a while."

Smith went from strength to strength, marching Australia to victory at Edgbaston and Old Trafford, while Marnus Labuschagne enhanced his reputation with four consecutive half-centuries.

Matthew Wade, who started and finished the series with centuries, has also entrenched himself in the XI.

But Marcus Harris, Cameron Bancroft, Usman Khawaja and Travis Head will look back with regret, and forward with a sense of the unknown.

"Steve Smith was obviously outstanding, what a pleasure to watch.

"The development of Marnus was exciting ... (Wade scoring) two test hundreds in an Ashes series showed great fight and skill.

"If we start batting well we'll win a lot of games of cricket."