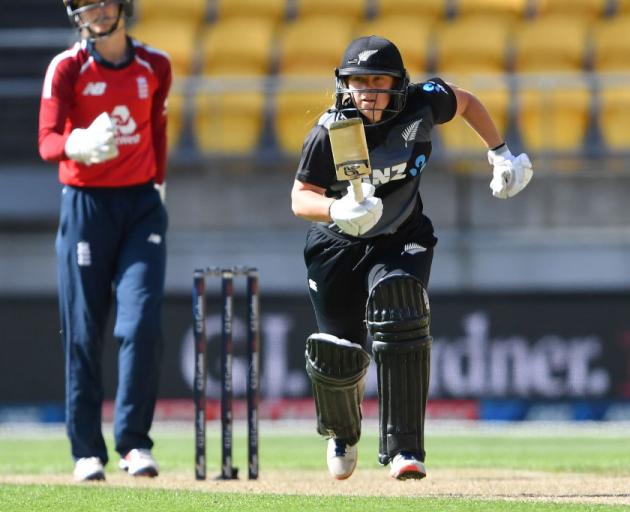 Leigh Kasperek of the White Ferns runs during game two of the International T20 series against England. Photo: Getty Images
Another White Ferns series, another defeat.

The New Zealand women's cricket team have again been beaten handily, going down to England in their Twenty20 series. Like the one-day series that preceded the 20-over matches, New Zealand have been declared the loser with one match still to play.

The six-wicket defeat in Wellington this afternoon - their 10th in their last 12 in all formats - started off with an element of promise that didn't exist with the first contest in the series. Despite early sputters with the bat that again saw captain Sophie Devine succumb to another early exit, New Zealand looked capable.

Veteran Amy Satterthwaite (49 off 30 balls) anchored a strong partnership alongside all-rounder Amelia Kerr (25 off 22), who together powered the hosts to 84-2 in the 12th over before the latter was dismissed.

From there, the collapse began. The White Ferns mustered just 39 further runs for the loss of seven wickets in the following 8.2 overs, making their way to a well below-par 123-9.

With the ball they again failed to halt the visitors' top order. Despite Rosemary Mair picking up two wickets, an 83-run third-wicket partnership between the familiarly dominant duo of Tammy Beaumount (63 off 53) and Heather Knight (a run-a-ball 39) saw the visitors needing just 20 runs for victory off their last 30 balls.

They cruised home with 16 balls and six wickets to spare, and Devine admits losing is becoming a common theme for the Ferns.

"Unfortunately it sort of seems to be a bit on repeat, there was glimpses – I thought Amy Satterthwaite again with the bat was again positive and her partnership with Amelia Kerr was just teetering the game our way," she says.

Devine again underwhelmed with just eight runs off 10 balls, her fifth consecutive performance in the black shirt with a score below 16 – a sorry sight for one of the top all-rounders in the world.

She says the wicket "played really well", so there's no excuses for her or the team.

"We couldn't hold that pressure for long periods, and again we know how good the England top order is, so credit to England again."