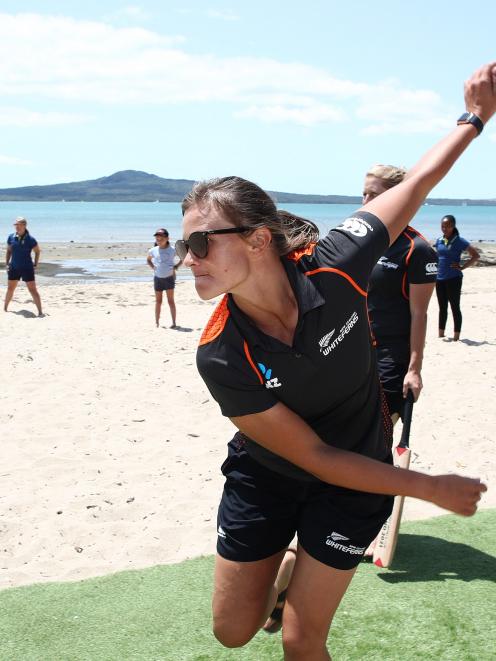 White Fern Suzie Bates bowls during a game of beach cricket held as part of the ICC Women’s Cricket World Cup venue announcement at Kohimarama Yacht Club in Auckland yesterday. PHOTO: GETTY IMAGES
Dunedin has been named as one of the six host cities for next year’s women’s World Cup but when and what teams will be involved is not yet known.

An announcement about those details is due in March but yesterday it was revealed Dunedin would join Auckland, Hamilton, Wellington, Tauranga and Christchurch as host cities.

The games in Dunedin will be played at the University of Otago Oval.

The tournament will involve eight teams in 31 games, with the semifinals set to be played in Hamilton and Tauranga and the final to be under the new lights at Hagley Oval in Christchurch. The tournament will start on Waitangi day next year and end on March 7.

Taking away the final and semifinals, that leaves 28 games which would suggest a straight round-robin format will be played between the eight teams.

Dunedin Mayor Aaron Hawkins said it was a privilege to host a tournment.

‘‘It’s bigger than just what goes on down at the ground, of course, because for major events like this the whole city becomes part of the experience, ensuring fans have a great time, before, during and after the match," he said.

DVML chief executive Terry Davies said southern cricket fans would be over the moon that Dunedin had been selected as a host city for such a prestigious tournament. The University Oval would be a stunning venue for fans to enjoy quality international cricket, he said.

"Hosting matches in Dunedin, the home of Suzie Bates, will be a special occasion for all involved," she said.

With the rapid growth in women’s cricket globally, the tournament is expected to attract significant interest from international fans.

Otago Cricket Association chief executive Mike Coggan was excited to have Dunedin among the hosts.

‘‘It’s an exciting period in the evolution of women’s cricket all around the world and equally exciting for our region with the announcement of Dunedin’s involvement. It’s fantastic that we get to see our very own White Ferns — Suzie Bates, Katey Martin and Hayley Jensen — in action on home turf," he said.

New Zealand last hosted the World Cup, which is a 50-over tournament, in 2000 when it beat Australia in the final, also in Christchurch.

Alexandra did not apply and Queenstown also come up short to host games. The tournament, though, could be a bonus for the Central Otago towns.

With University of Otago Oval unable to be used for first-class play because of games in the tournament, first-class men’s games and other games may be shifted to Molyneux Park or Queenstown Events Centre.