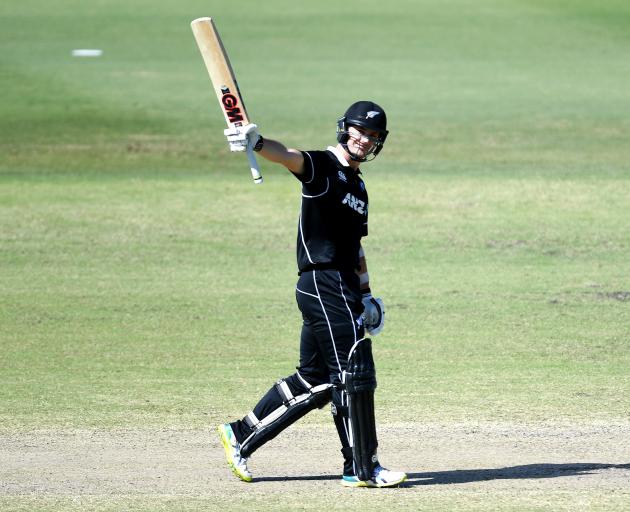 New Zealand XI batsman Will Young celebrates scoring a century during the World Cup warm-up match against the Australian XI at Allan Border Field in Brisbane yesterday. PHOTO: GETTY IMAGES
Steve Smith and Glenn Maxwell again starred with the bat as the Australian XI won the third and final one-day warm-up match against the New Zealand XI in Brisbane yesterday.

For the second time in as many matches, Smith (91 not out off 108 balls) and Glenn Maxwell (70 from 48) were the star batting turns for the home side, putting together the key partnership of 104 of 91 balls in Australia's pursuit of 287, although the former skipper appeared to aggravate his still recovering elbow while running a single.

Paceman Pat Cummins nabbed four from 32 from eight overs while Mitchell Starc, who took one for 35, impressed for the second time in three days, finding swing and pace, and getting through eight overs in an encouraging showing.

The New Zealand side's total of 286 for nine was built around performances from Will Young, who scored his second straight century against the home team, and George Worker, who compiled 59.

Jimmy Neesham put together an impressive cameo of 39 from 27 before a late collapse of 23 runs for five wickets restricted a total that at one point looked certain to top 300.

Despite not being part of the Black Caps' World Cup squad due to upcoming shoulder surgery, and without a one-day international cap to his name, Young was the dominant batsman of the series, posting scores of 60, 130 and yesterday's 111 which came off 108 balls.

And while the warm-up series at Allan Border Field was unofficial, it is worth noting that the right-hander's overall tally was not far short of the New Zealand record for a three-match ODI series.

David Warner's unhappy return to the opening slot continued when he was caught behind from the bowling of Matt Henry for two early in the run chase, and when Usman Khawaja (23), Shaun Marsh (32) and Marcus Stoinis (15) all came and went without making telling contributions, it was left to Smith and Maxwell to do the business with Australia at a precarious 137 for four.

As the shadows grew across the outfield, it was Maxwell who moved the attention squarely back to him courtesy of a series of brutally struck fours and sixes on the leg side.

The right-hander needed only 37 deliveries to fly to a second straight half-century.

He continued his assault but as the light began to falter, he was out 45 runs short of Australia's target.

Minutes later, with 44 overs bowled, the umpires offered both captains the option to end the match early in what had become near-darkness.

With Australia ahead on the DLS method, it claimed victory.