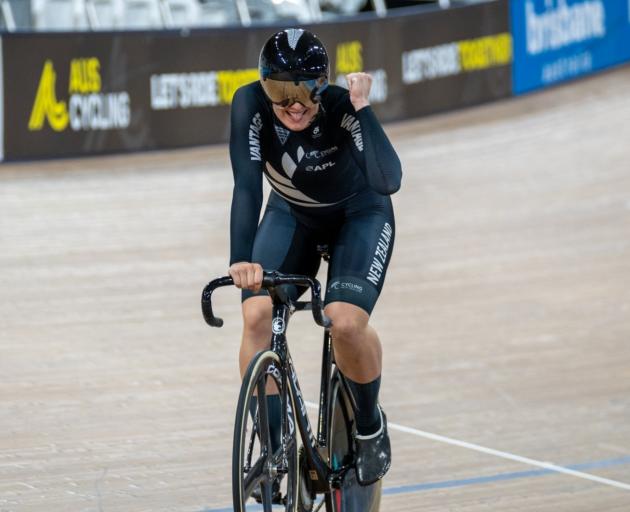 Andrews, the Tokyo Olympic silver medallist, added victory in the keirin to the sprint honours she won on the first day of the championships at the Anna Meares Velodrome.

Gate produced a stunning effort to bag two gold medals in the evening programme, winning both the 4000m individual pursuit and the scratch race.

Both riders came to Brisbane without any specific track preparations.

Andrews only recently returned to training after an eight-week break following her serious crash in December where she broke her collarbone and suffered a concussion.

Gate has been based in Europe, after flying there from Tokyo for surgery on his broken collarbone in his fateful crash during the bronze medal team pursuit against Australia.

Following a complete break off the bike in December after the plate was removed from his shoulder, Gate came directly off a build-up on the road to travel to Australia.

Andrews won her heat emphatically but was made to work hard for the win in the final after pushing to the front two and a-half laps out.

"I wanted to stay out of trouble and do a long sprint," Andrews said.

‘‘It was a very tough final. I was definitely dying at the end but I was happy to hold on for that win.

Gate, who qualified for the individual pursuit final 3.5sec slower than top qualifier Connor Leahy (Australia), pipped Olympic team-mate Jordan Kerby by 0.1sec for the right to take on the Australian in the final.

However, Gate stepped up, opening an early lead before Leahy caught up at the halfway mark. The pair could not be separated to the 3km mark before Gate just found some clear air, and eased away to win in 4min 8.482sec, 1.5sec ahead of the Australian.

The 31-year-old broke the national record in the process, going 0.3sec inside his own mark set over a year ago at the national championships, while Kerby was untroubled in winning the bronze medal after catching his opponent.

No-one was more surprised at his outstanding form than Gate himself.

"I didn’t have the biggest expectations coming here, especially the pursuit. I haven’t touched that bike since I fell off it at 65kmh at the Olympics,” Gate said.

"It was, like, hope for the best which is, of course, textbook how you should not approach an individual pursuit."

He returned late in the evening session for the 15km scratch race, the New Zealand contingent working well as a unit before Gate broke clear mid-race with Australian Blake Agnoletto to gain a lap on the field.

The Kiwis kept the pace hot with Gate outlasting his rival to claim the win and make it three gold medals in two days.

Individual pursuit gold medallist Bryony Botha led the points race until she got stuck at the back of the pack for the final sprint, taken by Australian Chloe Moran. Botha had to settle for second, with team-mate Prudence Fowler claiming the bronze.