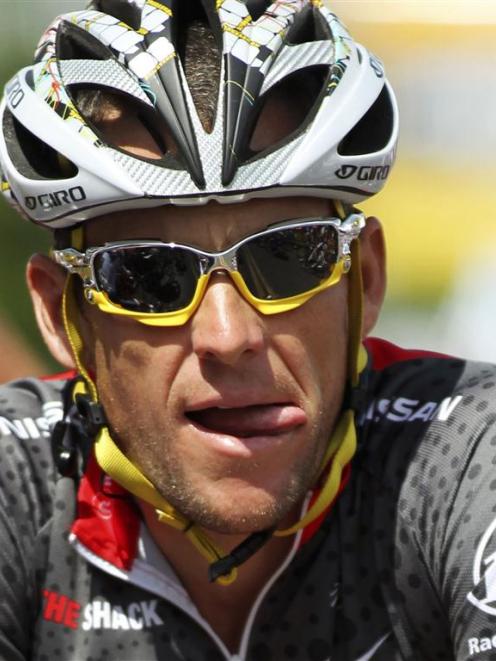 Saying, "enough is enough", Armstrong sent out a statement yesterday indicating that he would not challenge USADA's charges he had doped throughout his career while continuing to deny he ever used performance-enhancing drugs.

While the USADA can remove Armstrong's titles, such a decision could ultimately rest with the Court of Arbitration for Sport in Lausanne, Switzerland.

But weary from years of denial, legal battles, skirmishes with former-team mates and anti-doping chiefs, it is a fight Armstrong says he no longer has the stomach for.

"Today I will turn the page," Armstrong said. "I will no longer address this issue regardless of the circumstances."

Armstrong may have turned the page but the story is far from over.

One of the sporting world's most polarising figures, Armstrong remains a hero to millions of cancer survivors for beating the disease and coming back to win the Tour de France a record seven times. To others, he is a drug cheat and fraud.

The debate over Armstrong's guilt will now rage, with some heavy-hitters like longtime sponsor Nike, the world's biggest sportswear maker, lining up alongside the disgraced cyclist, while anti-doping crusaders proudly claim victory.

Since 2004, Nike has helped Livestrong, Armstrong's organisation to help cancer survivors, raise over $100 million for cancer research and created the Livestrong yellow wristbands that became a global phenomenon with over 84 million bands distributed.

"Lance has stated his innocence and has been unwavering on this position. Nike plans to continue to support Lance and the Lance Armstrong Foundation, a foundation that Lance created to serve cancer survivors," Nike said in a prepared statement.

Armstrong, 40, has been one of the most successful and controversial cyclists of all time, returning to the sport after beating cancer to win the Tour de France seven straight times, from 1999 to 2005.

Livestrong takes its inspiration from his achievements and recovery from testicular cancer that also made him a hero to many and boosted the sport's popularity in the United States.

But the cyclist also made many enemies throughout his career, with several of his former teammates and colleagues allegedly ready to testify he doped.

Former teammate and deposed Tour de France winner Floyd Landis accused Armstrong in 2010 of using performance-enhancing drugs and teaching others how to avoid being caught.

But Armstrong also has his loyalists, outside and inside the sport, such as Jim Ochowicz, director of the BMC cycling team and a long-time friend who helped him when he was an amateur rider and young professional.

"As a friend of Lance's, I support his decision to call it an end," said Ochowicz. "He has done so much for our sport over the years, and I am sad at what has transpired.

"I love him. I know he still has a big fight ahead of him and his battle of trying to find a cure for cancer and help survivors and carry on with the Lance Armstrong foundation.

"I think he has earned every victory he's had," he said.

The USADA, however, believes it has enough compelling evidence to prove Armstrong did not claim his victories fairly.

A quasi-governmental agency created by the U.S. Congress in 2000, the USADA formally charged Armstrong in June with doping and taking part in a conspiracy with members of his championship teams.

The agency said in a letter to Armstrong that it has blood samples from 2009 and 2010 that are "fully consistent" with doping.

Michael McCann, an expert in sports law at Vermont Law School, said that Armstrong's decision to not contest the USADA charges in arbitration might have been the cyclist's best option in the face of mounting circumstantial evidence.

"This gives his supporters reason to support him," McCann told Reuters. "Whereas if he had gone to arbitration and lost -which I think almost definitely would have happened - from a public relations standpoint, that would have been much more harmful."

In losing his titles, Armstrong joins Canadian Ben Johnson and American Marion Jones as the highest-profile athletes to lose championships as a result of doping sanctions.

Johnson was stripped of the 1988 Seoul Olympics 100 metres title after testing positive for a steroid, while Jones lost her 2000 Sydney Olympics 100, 200 and 4x400 metres relay gold medals when she confessed she had been taking drugs at the time.