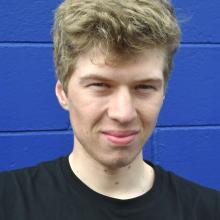 Kees Duyvesteyn
Dunedin rider Kees Duyvesteyn won the elite men's race to take the series lead, while Kate McIlroy and Amy Hollamby combined to ride away from the women's field as the Calder Stewart series resumed in Nelson yesterday.

Round four of the South Island cycling series was held on a tough circuit south of Wakefield near Nelson, with the elite men and under 23 riders tackling 162km while the women and masters raced 104km.

Riders had to contend with strong headwinds, causing lots of early splits and attacks as teams fought to control the bunches across the three races.

Sam Guest, Richard Lawson and Hamish Keast eventually got away in the elite men's race and worked well to build an 8min lead after 100km of racing.

Duyvesteyn led the chase, showing the form and strength from a successful winter racing in Europe and the United States. He took six riders across the gap before breaking away solo over the final few kilometres to win.

Logan Currie stays in the under-19 leader's jersey, even though he did not race. He is in the United Kingdom competing in the World Road Championships.

Hollamby and McIlroy blitzed the women's elite field. Hollamby (40) let McIlroy (38) roll over the line to cap off a strong day for two of the oldest riders in the field. McIlroy built on her lead in the most combative rider competition.

Henrietta Christie was third, ahead of her team-mate Elyse Fraser. The pair finished 10min behind McIlroy and Hollamby, and four minutes ahead of the rest of the women's field.

The series now moves to Canterbury for the final two rounds on October 19 and 20.

- Dunedin's Ella Harris has impressed with a solid effort in a gruelling 149km elite women's race at the UCI Road World Championships in Yorkshire.

Harris, in her first year on the World Tour, recovered from delays after a puncture early in the race to ride back on over the major climb.

"Ella fought back well and hung in there. Once the pace had gone on from the Dutch, she did well to get back and ultimately finish in that second pack," Cycling New Zealand director Craig Geater said.

"For a young rider in her first elite worlds, it was a gutsy and impressive ride."

Things were tougher for Mikayla Harvey, of Wanaka. Harvey, who had been ill before the championships and was unable to match the pace over the tough test through the Yorkshire Dales and did not finish.