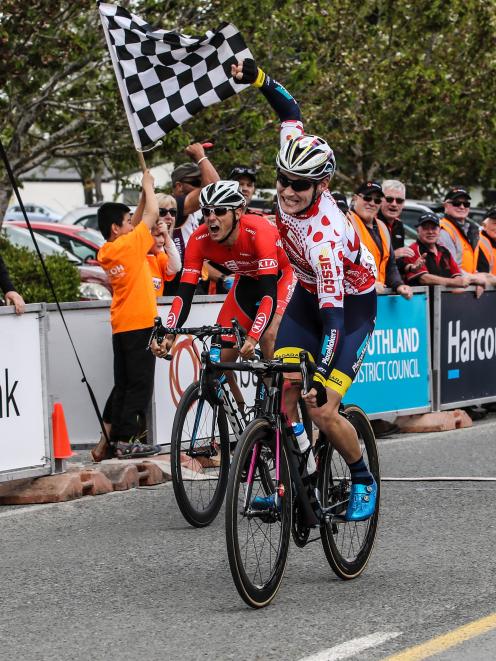 Zenovich (Placemakers) won a three-man sprint up the main street of Lumsden to claim victory in the 170km stage from Invercargill, and ride his way into the yellow jersey for today's stage from Riverton to Te Anau.

And it was a deserved victory after Zenovich had worked hard all day to drive the break and to put himself into a position to contest the final furious sprint.

"At the start, the team plan was just to relax because this is the longest stage of the tour and there's a lot of long days to come, but me being me, I got a little bit excited and got into a breakaway about 50km in,'' Zenovich said.

"I seized my opportunity with about 10km to go, didn't get much help into the finish and I don't have any idea how I managed to finish it off, but I'm happy about it.''

A Southlander has not won the tour since Doug Bath managed the feat in 1994, while Zenovich's stage win is just the second by a local since 2003.

"I know it's a long straight from that last corner and it looks a lot shorter than it actually is. I've been trying to win this stage for four years and I always manage to muck it up. I just waited, I was patient and I managed to pull it off,'' he said.

"I said before the stage yesterday that it was time for another Southlander to win a stage and I'm stoked it's me, which is a bit selfish. Wearing yellow is like the icing on the cake; it just makes it that much sweeter.''

Zenovich was part of a four-man breakaway which had grown to a dozen by Nightcaps and included fellow Southlanders Corbin Strong and Josh Haggerty. It had a lead approaching 6min.

Efforts by the peloton to shut down the attack were hampered when they took a wrong turn after Nightcaps.

Oliver Martin was second on the stage, with American rider Kevin Girkins (Kia Motors-Ascot Park Hotel) third and winner of the most combative honours.

Zenovich holds a slim 6sec lead over Martin, with Girkins 22sec in arrears.

Ollie Jones (PowerNet) leads the sprint ace standings while team-mate Connor Brown is the leading under-23 rider and Paul Odlin the best of the over-35 riders.

Today's stage takes the riders 150km from Riverton along the southern coast, and takes in the Blackmount hill climb before finishing on the Te Anau lakefront about 2pm.