The Mike Greer Homes-Circuit Asphalt rider broke away with more than half of the 142km stage from Riverton to Te Anau still remaining and managed to hold off the chasing pack comfortably into the lakefront finish.

“It was a long day. It was a bit windy to start with and we knew the cross winds were going to be along the coast,” Pithie, who started the day almost 7min behind tour leader Michael Vink, said. 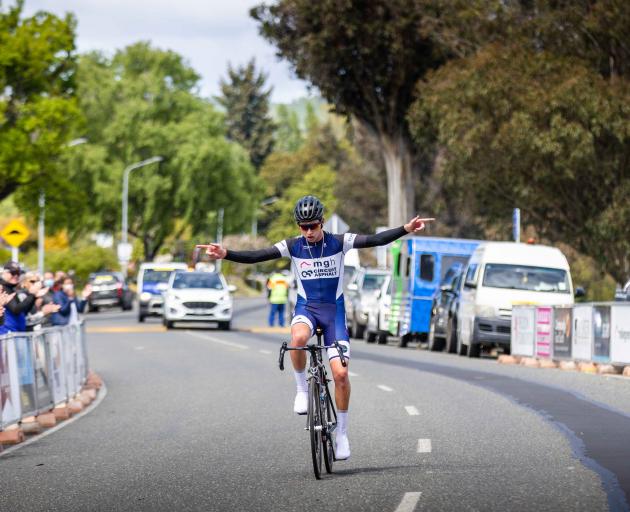 Campbell Pithie wins stage three of the Tour of Southland in Te Anau yesterday. PHOTO: HARRY TALBOT/TOUR OF SOUTHLAND
“It was actually pretty calm for the first 25km and I thought the initial break was just going to go away, but on one of the climbs one of the Black Spoke boys put it in the gutter and it split the peloton.

‘‘We rode up to the breakaway and no-one was really working, so I decided I’d give it a nudge and try and get a gap over Blackmount.”

Pithie led by as much as 6min as he headed over the Blackmount hill climb and went on to a 1min 20sec win from Campbell Stewart and Sam Ritchie.

“They all kind of sat up and it ended up being a long day out front by myself. I knew it was meant to be a tailwind through to the lake so I knew I was a shot, but it was a tough day and I’m really happy to take the win.”

Winning a stage on New Zealand’s most prestigious bike race was a special achievement, Pithie said.

“It means a lot. It’s my fifth time doing the tour and I’ve never really come close to winning a stage.

‘‘This year I knew I could be in with a shout because I’ve been in good form after coming back from Europe a few months ago. I was really happy to take this one today.”

The early break featured Joel Yates, George Jackson, Josh Burnett, Callum Nisbet, Matt Zenovich and Dougal Allan, and they were able to get out by over one minute before the stage changed shape.

Vink had a relaxed finish protected by his team-mates in the main bunch and retained the yellow jersey heading into today’s 108km stage from Mossburn to Queenstown, which finishes with a breathtaking 6km climb up the Remarkables.

“Luckily we had four guys up there and we weren’t really under too much pressure,’’ Vink said.

‘‘To see Campbell Pithie win the stage was great — it’s been a long time coming and it was great to see a longtime friend of mine pull off the victory like that.”

Vink, who has won the SBS Bank-sponsored tour twice in the past three years, leads Currie by 34sec, with Olympic silver medalist Campbell Stewart 42sec behind.

Transport Engineering Southland-Talley’s has taken over the team classification standings. James Fouche retains both the king of the mountain and sprint ace jerseys, and Currie holds on to the under-23 jersey.

Glenn Haden continued his duel with Paul Odlin for the over-35 classification and kept the silver jersey for another day, while Pithie was also deservedly rewarded with most combative honours.