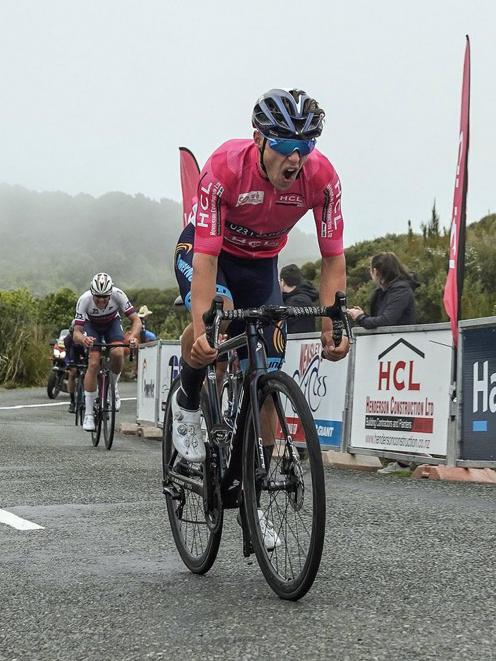 It is one of the more notable climbs in New Zealand cycling and it did not disappoint yesterday.

Southland’s Corbin Strong powered up it to claim his second stage win on the Tour of Southland.

The 20-year-old world points race champion has ridden the punchy climb above the port town plenty of times and he was welcomed home by Motupohue with a cosy blanket of fog as he ground his way into a narrow overall lead with three stages remaining in this year’s race.

The PowerNet rider, who also won the bunch sprint into Te Anau on Tuesday, edged out 2016 winner Aaron Gate and defending champion Michael Vink to take a 9sec overall lead from Vink, with 2013 winner James Oram at 15sec.

“Before this tour started this is one stage I noted down and thought I could perform well in and to pull it off was pretty special,” Strong said at the end of the 157km stage from Invercargill to Bluff.

After his superb climb up the Remarkables yesterday, 19-year-old Queenstown rider Reuben Thompson was part of a 20-strong breakaway group which headed up the road early and included most of the heavy hitters in this year’s race.

But as the raiding party approached Invercargill with Bluff Hill on the horizon, the pressure told and Thompson’s defence came to an abrupt end.

“Everyone knew it was going to be crosswinds today and poor old Reuben had a target on his back in yellow and with a lot of riders wanting to see some crosswind action,” Strong said.

“As soon as we turned the corner it was into the gutter and it was all go from the start. Reuben had a really gutsy ride — he was there for all of 140km of the stage — and then he unfortunately fell victim to the crosswinds.

"But it was an extremely gutsy ride from him and I’ve got a lot of respect for how he rode. I’ve got the same target on my back [today], so hopefully I can fight another day and be on the right end of the splits.”

Strong has already achieved a huge amount in a short career, but winning Bluff is a highlight.

“It’s definitely pretty special. I grew up watching the Tour of Southland; watched it go past my primary school; followed it in the vans for eight years. It took me eight years to win the Yunca Junior Tour of Southland and I’m in my third Tour of Southland. I really want to win it this year, but there’s a long way to go and it’s a big ask for me and my team.”

The challenge ahead is a significant one, starting with today’s 170km stage from Invercargill to Lumsden, the longest in this year’s race.

There’s also tomorrow’s individual time trial in Winton, which riders such as Vink and Gate will be eyeing with hungry looks.

Strong has a significant lead in the under-23 classification, while his teammate Paul Odlin rode his way into the silver jersey for over-35 riders.

With Matt Zenovich not making the crucial selection, James Fouche took advantage to leap ahead in the Sprint Ace classification, while his teammate Paul Wright continues to dominate the King of the Mountain category and Black Spoke lead the team classification.