0 Comments
BMX riders from throughout the country pushed themselves — and their bikes — to the limits at the weekend.

The South Island championships in Cromwell attracted more than 290 riders from throughout the country for the two-day event.

The course was fast and smooth and the first day of racing relatively accident-free.

However, that changed for the finals on Sunday. Several crashes occurrred as pressure mounted and titles hung in the balance.

Among those vying for first were elite national riders Leila Walker and Rico Bearman.

Dunedin rider Derek Jelgersma jumps ahead of the competition in the men’s 45-49 20’’ race. PHOTOS: SHANNON THOMSON

Cambridge rider Walker is no stranger to pushing the limits on the track.

A six-time age-group world champion up to 2018, the 16-year-old won the women’s elite final ahead of Alexandra rider Holly Oldham in a combined junior and under-23 women’s field.

"It’s good to be mixing it with some different riders than I’m used to be racing against," Walker said. 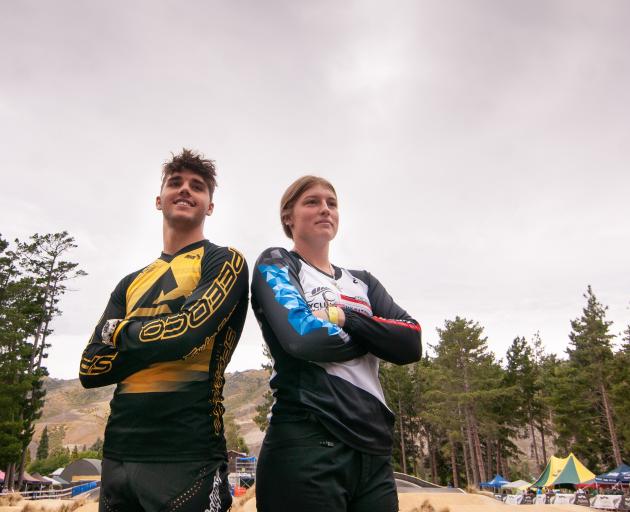 North Harbour rider Rico Bearman and Cambridge rider Leila Walker claimed the major honours at the South Island BMX championships in Cromwell at the weekend.
"In a male-dominant sport, it’s really cool to see young girls coming up, and as an older rider, I would just encourage you to get out there ... just get on a bike and push the limits, have some fun."

Those in the know say Walker is one to watch on the national and international stage.

"She’s an up and comer — but she’s coming up through those ranks fast," BMX NZ national commissaire and national officiating panel member Mike Butler said.

Bearman (18), representing North Harbour, held off a fast group of riders to win the men’s elite class on Sunday afternoon.

While the track was smaller than he was used to racing on overseas, he found the event a great chance to meet with younger riders and encourage them in the sport, he said.

"I just love riding my bike and the adrenaline of racing around the track, doing jumps," he said.

"I guess winning is the main thing — I think everyone loves winning."