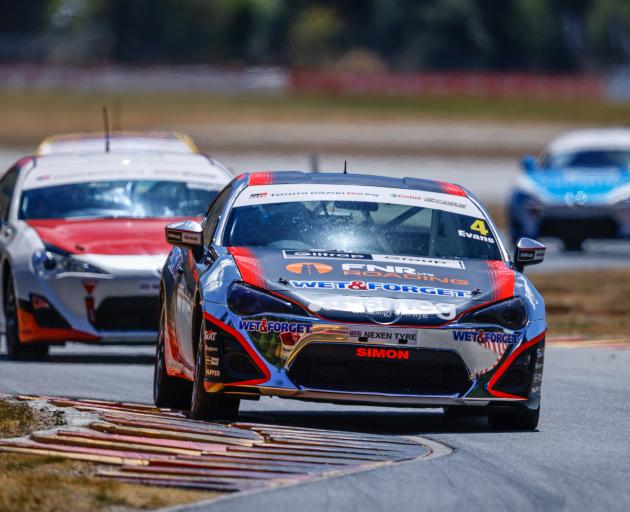 Simon Evans shows his style at Highlands at the weekend. PHOTO: BRUCE JENKINS
Simon Evans has emerged the early leader in the Toyota 86 racing series.

The Auckland driver won both the first and third races at Highlands Raceway in Cromwell over the weekend.

Evans put on one of the most dominant displays in the series’ recent history to claim the first race.

Veteran John Penny emerged to win the second one, as Evans was left in sixth.

However, Evans’ results were enough to ensure he had pole position, alongside Rowan Shepherd, for the final race.

He made use of that to lead going into the final lap, when a crash meant the race finished under the safety car.

‘‘I had really good drive off the corners and that helped me defend’’ Evans said after the third race.

‘‘This is a really positive start to the team’s campaign and it’s great to see Rowan [Shepherd] back up front as I really enjoy racing with him. I felt like I was controlling the race well but it’s always tough to win in this championship so I’m very pleased.’’

In the Super GT Series, also at Highlands over the weekend, Steve Scoles and Ben Byers claimed victories, while the first race was abandoned following an early crash.

However, given he did it in a lunch break, the time could not be recorded officially.

‘‘The balance was good. I think we were slightly high in the tyre pressures because I started to lose the rears towards the end of the last lap especially, but I’m happy with the fastest lap. It was nice to show people how fast the car is.’’

‘‘Turn 3, the massive sort of sweeper with the wall around the outside, in there I was surprised by how I could keep carrying more and more speed and the car was dealing with it quite nicely.’’