With snow on the mountains it’s going to be a cold weekend, but we are hoping for clear skies and good pitch conditions.

With all fixtures being played in Dunedin this weekend, central teams will be making the journey for away fixtures.

What a great opportunity for all Dunedin clubs to get out and support their home team games!

In the Southern Premier League we have Caversham AFC v Otago University AFC at Hancock Park.

"Both sides are coming off morale-boosting victories and in a truncated season, it's a big game for both sides. Neither can afford any more slip-ups, if they wish to crack the top 4," said Cavvy head coach Richard Murray.

"Training has been both physical and with high intensity this week. We've shaken of the flu that has been floating around, and are looking forward to a good battle."

Dunedin Technical AFC are up against Northern AFC, with Tech head coach Malcolm Fleming saying "playing Northern who are on the improve, will not be an easy game".

"We have been a little disappointed of late, but only through our own mistakes. Our training is coming along well."

Tech have lost their American goalkeeper who has gone back home this week, so will be transitioning to a new keeper at training.

Green Island AFC are to host Wanaka AFC at Sunnyvale, after dropping to 2nd place on the table after their bye last week. GI are looking forward to putting those points on the board to claim back the top placing.

Shane Carvell, GI head coach, said the bye came at a good time, when players needed a window to rest and recover from strains and niggles picked up from the previous four relatively hard battles. 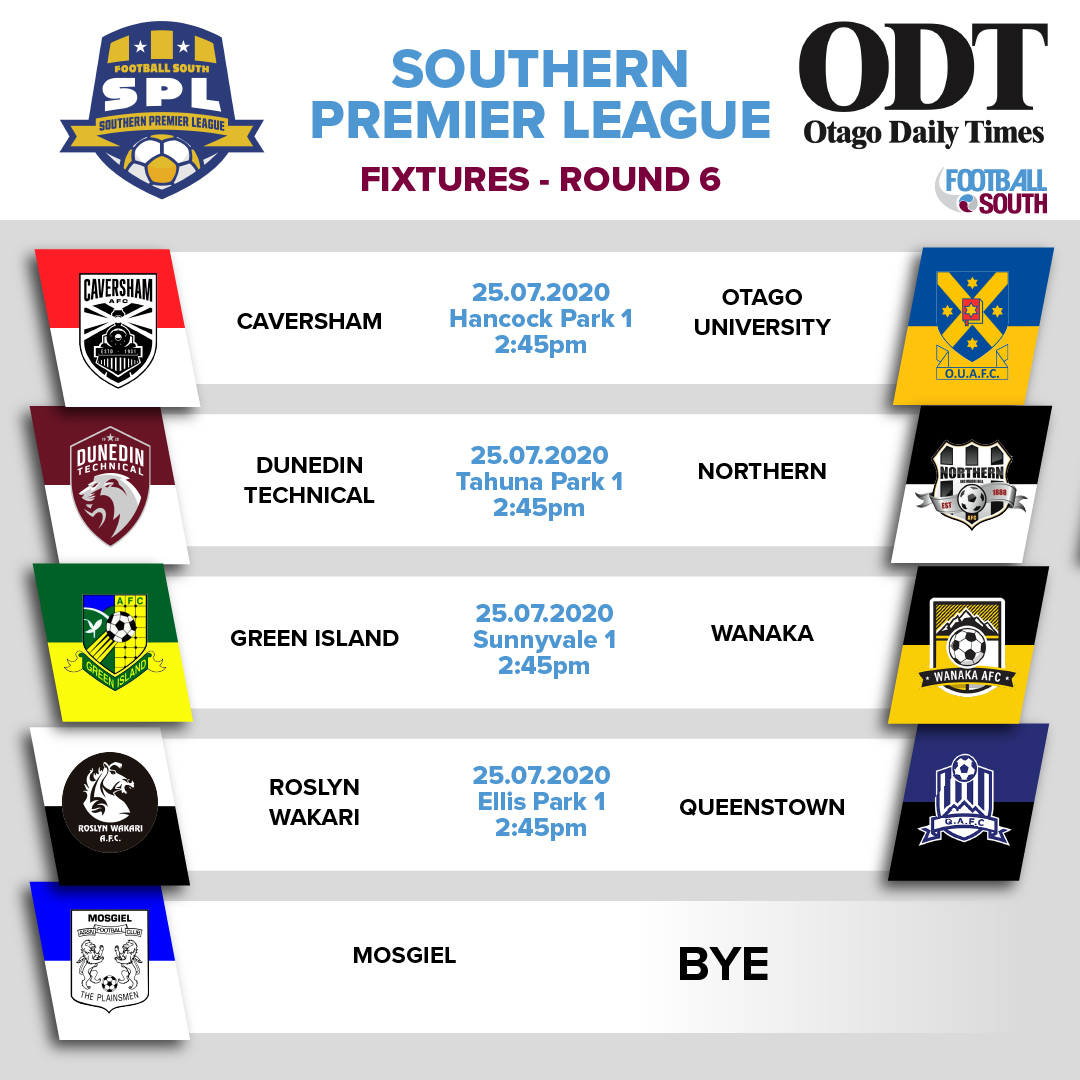 "From a coach's perspective, the bye has come when the momentum was building from a great start, with four wins on the trot.

"The lads have trained well this week with great focus and intensity. We expect a strong showing from an in-form Wanaka side," said Carvell.

"I know our boys will be well and truly up for the fight come the weekend, whilst playing on their home soil and in front of loyal home supporters."

"We know Queenstown are a very well-coached team by Jamie. They are very organised, and well drilled. We are looking forward to the challenge this week," Boylan said.

"We are still blooding a lot of young players, and will continue to do so throughout the season."

Tech is missing some players this weekend, including Sam Cosgrove, Harley Rodeka and Dylan Edwards, but will give it their all with the players available.

Mosgiel AFC have the bye this week, and will be back with a home game against Roslyn Wakari in round-7.

In the Women’s Premier League we have Green Island AFC back at Sunnyvale against Otago University AFC.

Green Island head coach Richard Kerr-Bell anticipates a strong team from Uni, with good technical ability and discipline. "They will be formidable," he said.

"As for us, we hope to continue to make noticeable strides towards becoming a competitive team in this league, and look forward to the game."

We also heard from Uni prems assistant coach Tessa Nicol this week. Nicol is looking forward to the rest of the season, and has said: "We're not going to get carried away with ourselves after last weekend's win. We know Tech and Roslyn are still everyone's favourites to finish 1st and 2nd. We're still just happy to be playing football after COVID 19. So it's been an enjoyable WPL this year with the noticeably less competitive element.

"All the teams are under less pressure, because everyone understands it's been tough getting started. We might get the odd result on the journey and a flattering scoreline here and there but we're just happy to soak it all up and learn from the experience. We'll just take it each game at a time. 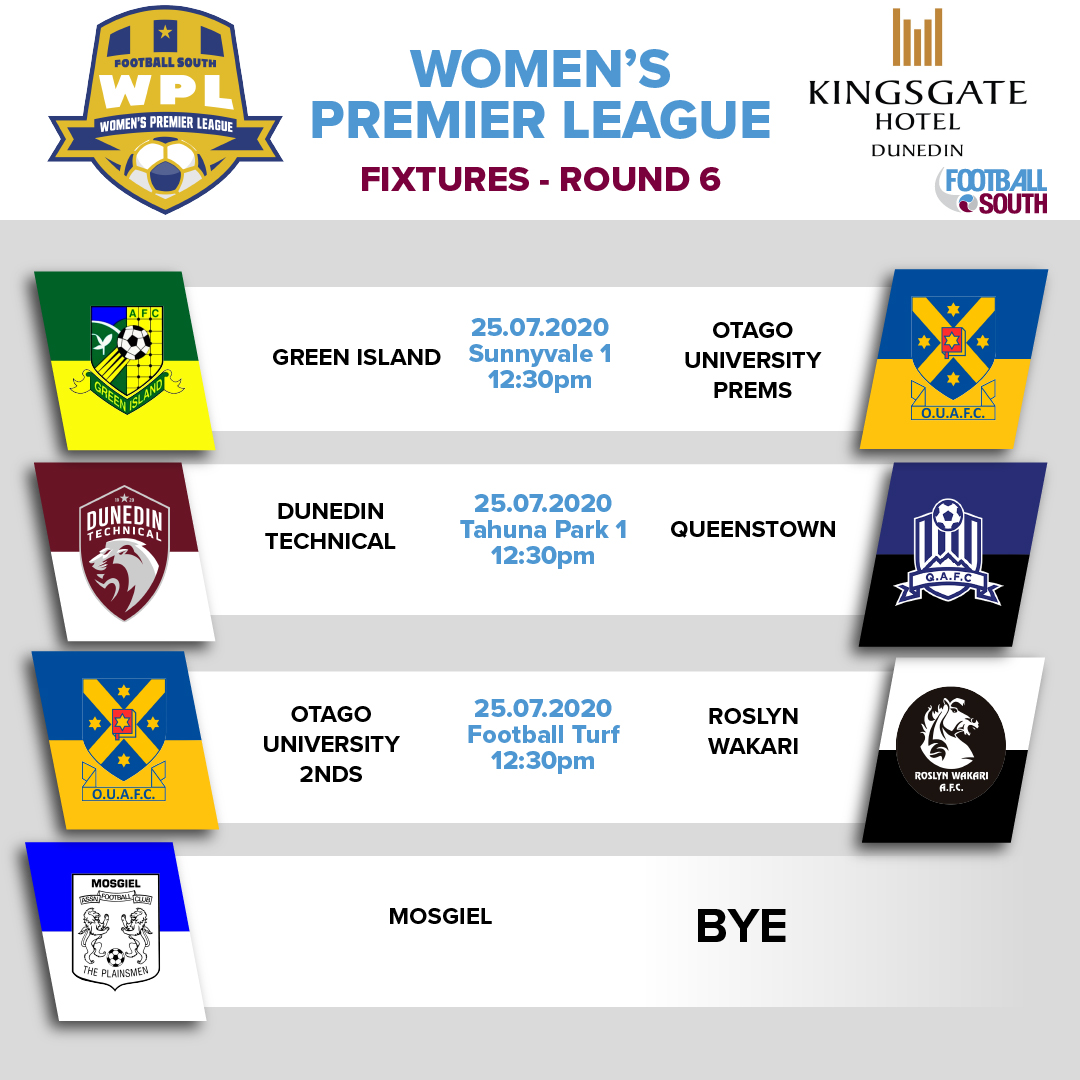 "We're really looking forward to playing GI, they have a great mix of youth, experience in the form of Jenna Reddy and are very well organised. I think it has the makings of a great game."

"On the positive side, we showed how much we can dig deep as a unit last weekend with our game against Roslyn Wakari.

"Queenstown is always a tough game for us, they have some fantastic talent across the park."

Johnston says that Tech are still yet to peak as a group; however, they are training very well, with an exceptional work rate.

"Pressure on selections is getting harder as the weeks go on, and improvements are being made."

Otago University 2nds play Roslyn Wakari AFC on the turf. Head coach Arnon Tapp said he knows it will be a tough, competitive game, with Roslyn having plenty of quality across  the park.

"We know the key players, and who we need to shut down," says Tapp."

"Roslyn had a good result last week, and by the sounds of it were unlucky to not come away with the three points.

"We have had a bit of disrupted training this week, due to catch up games being played from other grades."

Uni seconds should be at full strength for the weekend, and are looking to get something out of the game. Joyce O’Brian is available to lead the line for Uni this weekend, and will be looking to score a few goals.

Tapp said captain Chelea "will be key for us in the midfield battle."

He is looking forward to a competitive contest against Hamish and his Roslyn side.

Mosgiel AFC with the bye, back in round-7 at Memorial Park against Green Island.

Safe travels to both Queenstown and Wanaka teams making the journey to Dunedin!

Play safe, have fun and let's get those points on the board!