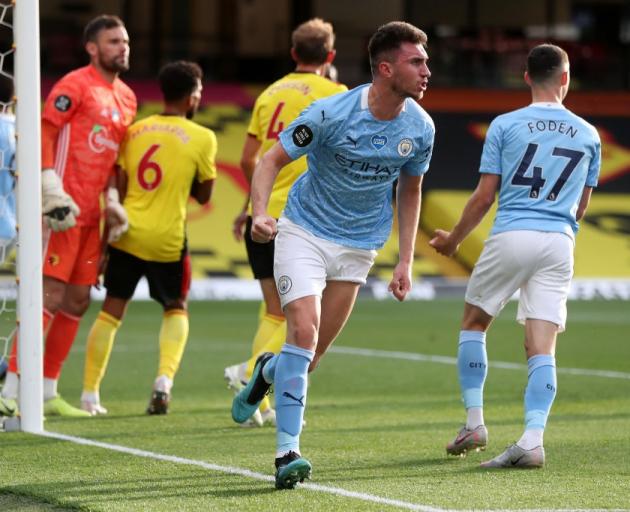 Aymeric Laporte scores during Manchester City's thrashing of Watford this morning. Photo: Getty Images
When you are mired in a Premier League relegation battle the last team you want to face is Manchester City, especially if you are Watford.

Their worst fears were realised in a 4-0 thrashing at Vicarage Road this morning, leaving them on the brink.

Inspired Raheem Sterling struck twice before halftime while Phil Foden and Aymeric Laporte scored after the break as City racked up a 13th straight win over Watford in all competitions.

The previous two meetings between City and Watford had resulted in an 8-0 home league win for Pep Guardiola's side in September and a 6-0 victory in last year's FA Cup final.

Watford's only consolation was that it could have been even worse today. With one game left they remain three points above Bournemouth and Aston Villa, who were playing Arsenal later, but their goal difference advantage has been wiped out.

Watford's trip to Arsenal on Sunday will be a nail-biter.

Hayden Mullins, in temporary charge following the surprise sacking of manager Nigel Pearson on Sunday, watched powerless from the touchline as City went through their routines.

Watford did have an early chance when Will Hughes slashed a shot miles wide, but it was mainly one-way traffic.

Sterling opened the scoring after 30 minutes with a stunner. Controlling Kyle Walker's driven pass instantly he looked up and smashed a right-foot effort past Ben Foster.

He doubled City's lead when he fooled Hughes into a trip and although Foster saved his spot kick, the rebound fell kindly to the England striker who touched the ball home for his 19th league goal of the season.

Foster performed heroics to deny Sterling and Kevin de Bruyne after the break and made another save from Sterling only for the ball to fall to Foden who tapped it home.

When Laporte headed in a free kick Watford were reeling but they managed to avoid any further punishment and had a stroke of luck when Gabriel Jesus's late header was ruled out for offside.

Defeat left the 17th-placed Hornets on 34 points with second-bottom side Bournemouth, who could have been relegated had Watford avoided defeat, on 31. Villa in 18th also have 31 points ahead of their late match at home to Arsenal.

All three sides have an identical goal difference but Watford have scored fewer than Villa and Bournemouth.