Football: Crisis deepens as U-20 tournament kicks off 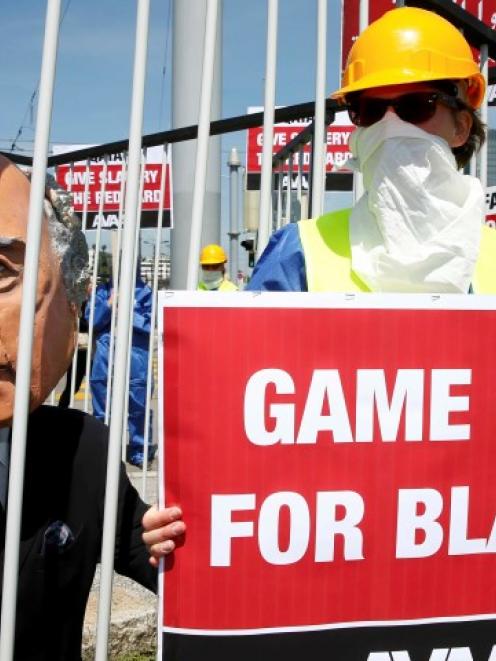 Activists from advocacy group Avaaz demonstrate near the Hallenstadion, where the 65th FIFA Congress is taking place, in Zurich, Switzerland. REUTERS/Arnd Wiegmann
The implications of the Fifa bribery scandal deepened yesterday ahead of the opening of the Under-20 World Cup in Auckland tomorrow.

Major Fifa sponsors Visa and Hyundai threatened to withdraw their backing of world football's governing body and demanded it clean up its act. This came as South Africa's successful bid to host the 2010 World Cup came under scrutiny as part of an investigation into corruption among high-ranking football officials.

Last night, Fifa president Sepp Blatter chaired an emergency meeting of the leaders of the six continental football bodies to discuss the scandal, while continuing to stay out of public view himself.

Uefa has called the dual American and Swiss corruption probes a "disaster for Fifa" and is supporting Blatter's election opponent, Prince Ali of Jordan.

Late last night, Russian President Vladimir Putin accused the United States -- which initiated the initial probe into football corruption -- of meddling in Fifa's affairs and hinted that it was trying to take the 2018 World Cup away from his country.

Putin said he found it "odd" that the investigation was launched at the request of US officials for crimes that did not involve its citizens and did not happen in the United States.

Fifa staff in NZ maintain the U-20 Cup will not be affected by the crisis.

Yesterday, football chiefs in Auckland declared a press conference closed after journalists kept asking questions relating to the scandal, which has seen the indictment of 14 men, including nine Fifa officials, for corruption.

One of the men is Jeffrey Webb, 50, a Fifa vice-president and chairman of the U-20 Cup organising committee, who was in NZ for the tournament's draw in February.

New Zealand Football chief executive Andy Martin, who is in Zurich for the annual Fifa congress, said the corruption scandal was very serious.

Michael Glading, who led the winning bid to host the U-20 tournament, said the process in which New Zealand vied with Turkey, Peru and Wales was "100 per cent straight".

It emerged yesterday that former Fifa executive committee member Chuck Blazer, who pleaded guilty 18 months ago to charges of corruption and is understood to have provided information to the US Department of Justice on which the charges are based, allegedly received US$750,000 ($1.036 million) from a US$10 million bribe to vote for South Africa to become the 2010 World Cup host.