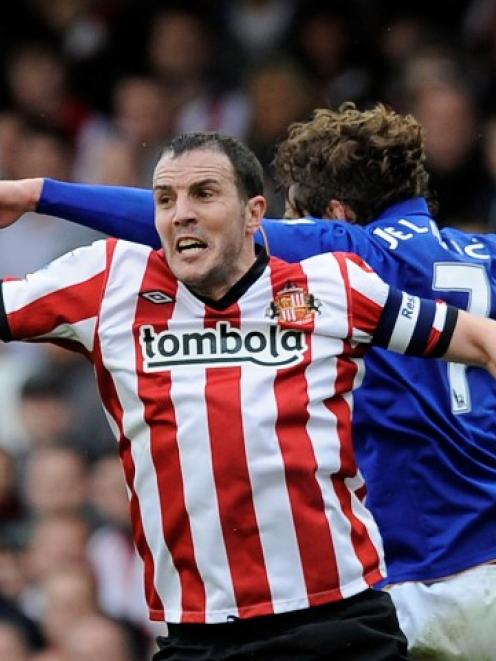 The visitors have not beaten Everton in any competition since 2001 but they started the brighter of the two teams and it came as no surprise when Scotland defender Phil Bardsley gave them a 12th-minute lead with a rare goal.

A free kick wide on the right was touched to Bardsley who took a couple of steps forward before unleashing a ferocious long-range drive that eluded a cluster of players in the penalty area.

It was the full back's fourth goal since joining twice FA Cup winners Sunderland from Manchester United four years ago.

Everton, who have lifted the trophy five times, equalised against the run of play in the 24th minute.

Tim Cahill, who has notched more than 100 goals from midfield in his career, has struggled to find the net in recent months but his second goal of the season set up a replay at the Stadium of Light on March 27.

Cahill beat Belgian international Mignolet from eight metres after showing lightning reactions to nod in a header from Nikica Jelavic.

The Australian had two chances to grab the winner for Everton before Mignolet flew to his right in the closing stages to save a flicked header from John Heitinga and quickly picked himself off the floor to stop Jelavic's close-range followup.

"I thought we started off really well. Their equaliser knocked us back a bit and after that the result could have gone either way."

Everton captain Phil Neville was frustrated his side did not seal a place in next month's semi-finals at the first attempt.

"We wanted to make use of home advantage by winning today and we put everything into that game," he said.

"We didn't start well but we came into it at the end and we're disappointed we didn't capitalise on our chances."