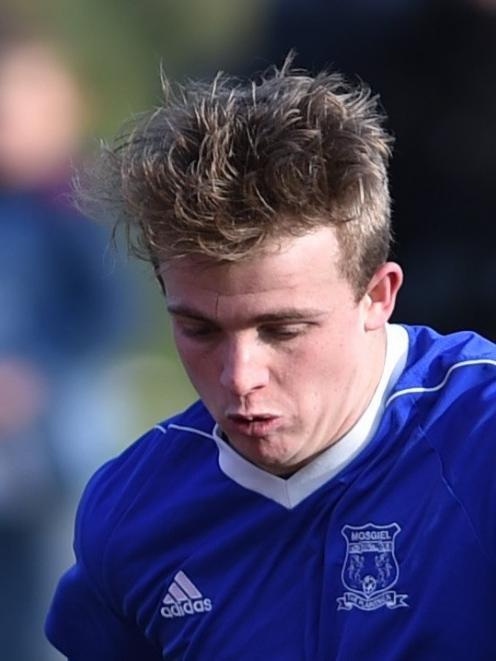 Cam Anderson
An own goal got Green Island off the mark in its first home match of the Southern League.

Cam Anderson made a characteristic silky run down the left wing and his cross was deflected off an unfortunate defender for a 51st-minute own goal.

It was the defining moment in the host team’s 1-0 win over Nomads United at Sunnyvale.

Green Island worked its way back into the match and enjoyed midfield dominance for the remainder of the first half, creating some half-chances.

Nomads had two good scoring opportunities late in the first half when a header went narrowly over the cross bar and Weston Bell was alert to clear a shot off the line.

Nomads also started the second half with tighter passing and better control of the ball.

But Anderson’s goal gave Green Island the upper hand and raised it to a new level of enthusiasm as it began to dominate long passages of play.

Both teams tired and the game opened up for the closing 10 minutes as Nomads pushed hard for an equaliser, but Green Island survived.

At Memorial Park, Mosgiel was beaten 3-1 by Ferrmymead Bays.

Ferrymead had a devastating 15-minute spell in which it took control of the match.

Ryan Stanley was heavily involved, as was the skilful Ben Kiore, and Kosei Oikawa was overlapping at every opportunity.

In the 26th minute, Erik Panzer was unmarked from a corner and he headed the ball low inside the left post.

Eight minutes later, Kiore’s cross from the left was met first time by William Pierce to make it 2-0.

Moments before halftime, Ferrymead caught Mosgiel in possession and Pierce made it 3-0.

The home side reduced the deficit early in the second half, when Isaac Hamilton was tripped in the box and Cody Brook made no mistake with his powerfully struck penalty.

From there, Ferrymead dug in defensively to hold the lead.

The Dunedin City Royals were toppled 4-1 by Christchurch United on the road.

Joel Peterson and Mika Rabuka claimed first-half goals to give Christchurch a 2-0 lead at the break.

The Royals got back into the game with a 47th minute penalty to Connor Neil.

However, the home side scored twice more in a 10-minute spell through Daniel McLennan and Peterson.

In the Southern Women’s Premier League, Chelsea Whittaker scored twice for the Dunedin City Royals to take her season total to six goals.

Emily Morison also had a brace, while Toni Power added a second goal in as many weeks in a 5-0 win over Roslyn-Wakari.

Amy Hislop scored seven for Otago University in an 11-0 rout over a Mosgiel team reduced to 10 players early in the second half.

In the ODT Premiership men’s competition, Northern jumped to the top of the table with a 2-0 win over Queens Park in Invercargill.

Queenstown took a 2-0 lead over Green Island, but Green Island came back to share the points 2-2.

Roslyn-Wakari drew 1-1 with the Royals, and Wanaka beat Mosgiel 6-4.