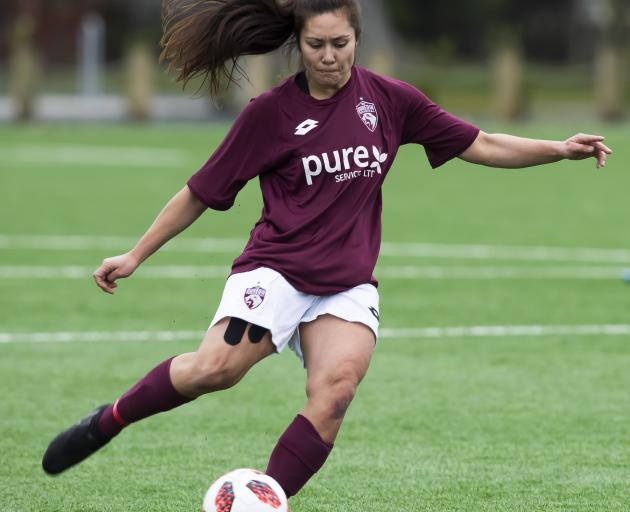 In the Women’s Premier League, Mosgiel AFC are back at Memorial 1 hosting top of the table Dunedin Technical AFC (pictured). Photo: Adam Binns
With the first half of round robin fixtures complete, teams are rearing to go with seven weeks of the season under their belt.

In the Women’s Premier League, Mosgiel AFC are back at Memorial 1 hosting top of the table Dunedin Technical AFC.

With Tech playing a solid attacking game all season so far, with a goal count of 31 for and only four against, Mosgiel will be looking to have a strong defensive line up.

Mosgiel assistant coach Jordan Pike said they are; “feeling nervous, as anyone would be going into a game against Tech!”

“Tech are a hard team to breakdown, hence why they are defending champions.”

Mosgiel are looking to the future on how they can eventually produce a performance like Tech, and in the meantime will play their best whilst working on developments each training session. 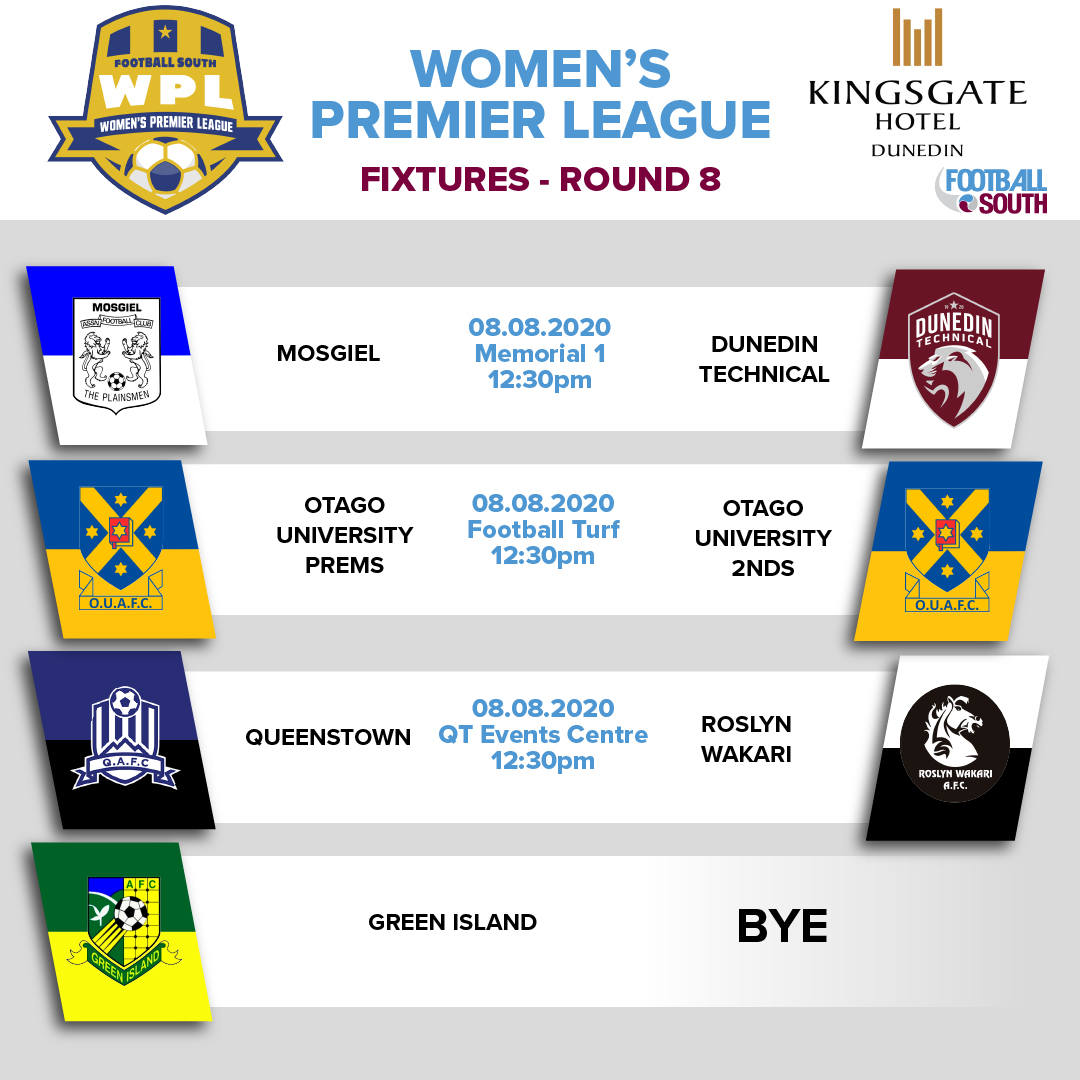 Tessa Nicol, Uni A's Assistant Coach said; “It's a little bit of back to the drawing board for us for the 2nd round.

“Our movement off the ball needs to be speedier and that will allow us to get our passing quicker. So we'll be working on that in training this week.

“Looking ahead, there are some WPL teams who are all progressing well over the course of the season. Our 2nds are in that category and we are not expecting an easy game by any means."

Uni A will be without forward Christy Barker, who suffered a concussion in the Tech match at the weekend, while Amy Hislop, Lena de Ronde and Megan O'Malley are still recovering from their injuries.

Head Coach, Stuart Moffatt will be hoping that the injury list doesn't get any bigger during the derby match weekend.

Queenstown AFC is back at the QT Events Centre this round, hosting Roslyn Wakari AFC for the second round robin.

Queenstown have been enjoying some amazing weather this week, which should make for amazing playing conditions come Saturday.

“We are very much looking forward to Roslyn’s visit, we know that they have been on a good run and are expecting them to start fast,” QT head coach Mark Ford said.

“It is very likely that they will start as favourites, however, we have been training hard and our team’s positivity is helping them look forward to the challenge.

“We have come together very strong, and reckon we can push them all the way!” 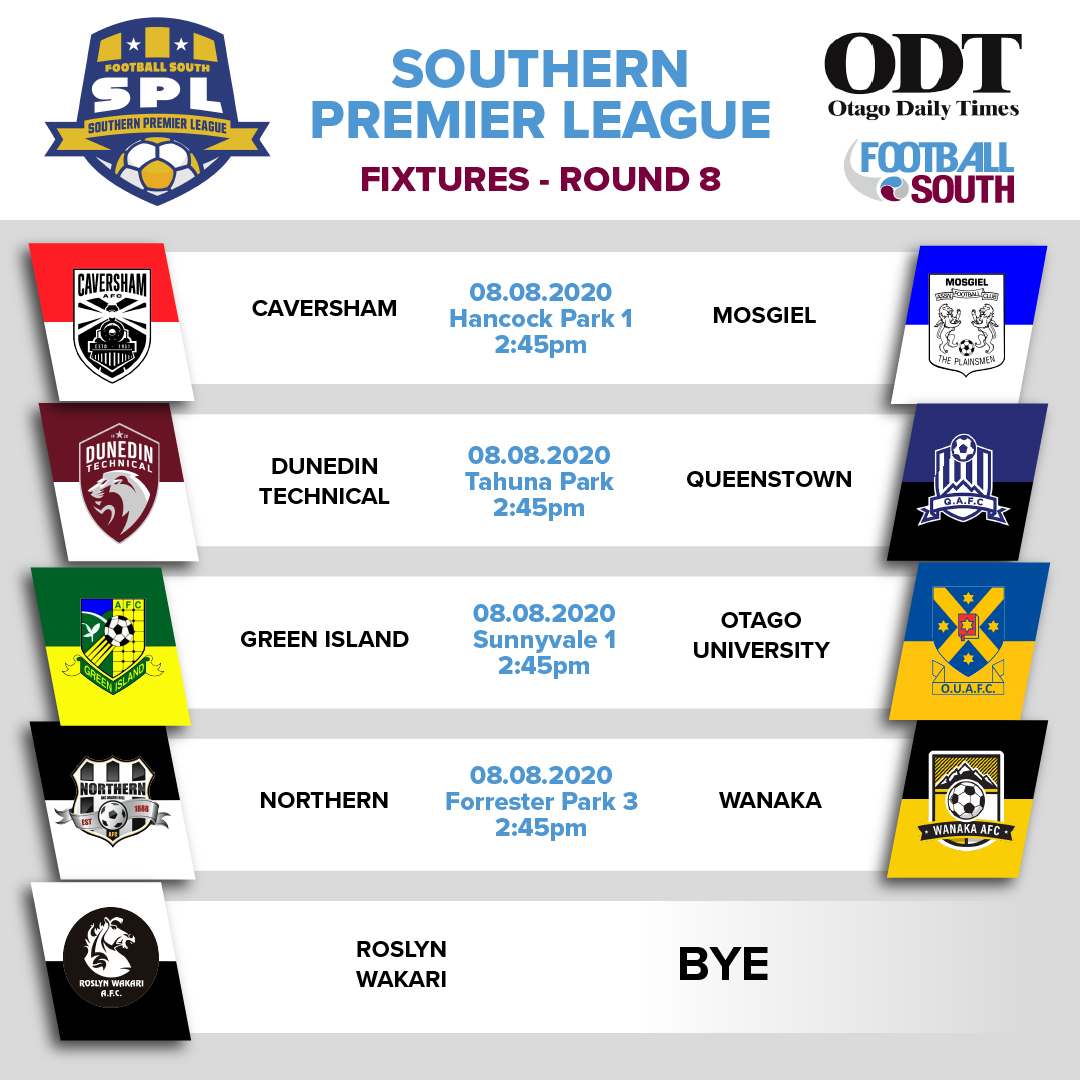 Everyone is expecting a close game, as both teams have only lost two games each as of last round.

Green Island AFC has the bye to start off the second round, and will be back rearing to go against Dunedin Technical AFC next week.

All Southern Premier League games Dunedin based this weekend.

Hancock Park will see Caversham AFC take on Mosgiel AFC for round-8, with Cavy head coach Richard Murray and his team looking forward to the game.

“After a bit of an honesty session on Tuesday, our boys responded and played up to the standards that have long been set at Caversham,” said Murray.

“We were up against a good Queenstown side, with plenty of quality. We outplayed them in all areas and put them to the sword despite missing Ben Wade and Caleb Mazure.

“Apart from the two goals we conceded, the most pleasing aspect was that everyone performed at a level they are capable of, although the standout was Ben Kiore with his 4 goals and 2 assists.”

Murray said Cavy seems to have dug out of the hole they were in from the first few fixtures, and have been trying to get out of it.

“We know we need to win our final two games to have any chance of cracking into the top 4 and contending for the title, so this really does have a semi final atmosphere for us and we will be approaching it as such.”

Dunedin Technical AFC host Queenstown AFC at Tahuna Park 1. After a tough catch up game on Tuesday evening, ending in a 2-0 loss, Tech will be having a busy week leading up to the challenge.

QT coming out of round-7 with a 9-2 loss to Cavy, will be training hard ready to make the journey from Central, and try get three points to bump them up the table.

Green Island AFC are back after the bye to host Otago University AFC at Sunnyvale.

“Saturday will be a tough battle from two teams who thus far have been playing well,” head coach Shane Carvell said.

“We expect Darren and his lads to bring their slick structured and controlled football to Sunnyvale.

“It’s not going to be easy for us as both teams will want to carry on their run of results. However, we have prepared well after a tough outing last week at Northern, and I know the lads are fizzing to do well come the weekend.”

Carvell knows it’s a matter of GI bringing what they have been working on from the training pitch over the last couple of weeks, into what he believes will be a very tight encounter.

“We will be wanting to try and put in a good solid  90-minute performance to hopefully carve us a result in front of what I am sure will be a big home crowd.”

“We haven't won a game yet so the boys know we have nothing to celebrate. We were really disappointed on Saturday to lose against Green Island.” Wilkinson said.

“I don't care if they were top - for us it was another loss.

“Our mindset has completely changed in recent weeks - we prepare and train well - we are determined to work harder than everyone we play and we hope for a result each week. I know I speak for all the lads there.”

He knows Wanaka will be clear favourites – and has said Northern need to put in a shift to even have a chance.

Since Wilkinson took over as Northern head coach a few weeks back, all 3 top sides have trained together.

“I have been really impressed with the players. As a former Prem player, I am just one of a number of older boys who have returned to train and help out after that Mosgiel game.” He said.

“All hands-on deck right now at Northern. We have done drill after drill after drill sorting out our shape - the lads have all been great and we have worked our socks off in running and exercises with the ball.

“I don't know when things will turn our way - but we are all really, really determined to get things right.”

Roslyn Wakari have the bye, coming back next week with a home game vs. Caversham AFC – the last fixture of round-1 before the table splits into top-4 and bottom-5.